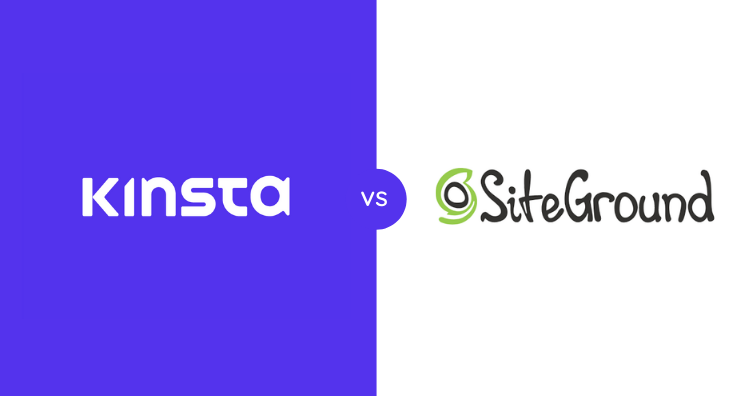 Kinsta and SiteGround are classic examples of why “mainstream hosts” aren’t great.

Kinsta has low limits on monthly visits, PHP workers, and they charge $100/mo for Redis (making them ridiculously expensive). While they use big brand names like Google Cloud, Amazon Route 53’s DNS, and Cloudflare Enterprise, they’re actually not that fast. Route 53 doesn’t perform well on dnsperf.com, their Cloudflare Enterprise doesn’t even include image optimization or Argo Smart Routing, and Kinsta also uses slower network SSDs. When you’re paying an arm and a leg for hosting, they should at least use NVMe, Redis, and ideally include basic features of Cloudflare Enterprise. Everything might look good on a surface, but you’ll be paying too much for what you get. If they were actually fast, they would at least participate in Kevin Ohashi’s WordPress Hosting benchmarks. At the end of the day, Kinsta is a marketing company dressed as a hosting company. Save your money and don’t even bother testing them.

SiteGround is even worse than Kinsta. It’s shared hosting with SATA SSDs, SiteGround’s CDN only has 14 PoPs, and their SiteGround Optimizer plugin does a horrible job addressing core web vitals which you can see in this table. Their CPU limits force you to upgrade (similar to Kinsta’s PHP workers), with high renewals and declining support. Their DNS was also blocked by Google for 4 days, causing sites to get deindexed which SiteGround took 0 responsibility for. Their community manager and “brand ambassadors” are admins for many popular Facebook Groups and use this to promote themselves while removing bad things said about SiteGround (they also go as far as threatening to sue people who write bad reviews). Once again, they’re a host with harsh limitations and a bad cache plugin/CDN which they over glorify. Don’t fall for it.

I use Rocket.net and you can test my global TTFB in SpeedVitals and KeyCDN (or just click through my posts). They’re miles ahead of Kinsta/SiteGround with a more robust Cloudflare Enterprise, 32 cores + 128GB RAM + NVMe, Redis, and there’s no PHP worker limits. Plenty of people moved and posted a faster load time/TTFB in Facebook Groups and TrustPilot. A perfect TrustPilot rating, best support you’ll find, and Ben Gabler is the man (here’s an interview I did with him). They’re smaller because they’re bootstrapped, but both their hardware/CDN are faster which are the 2 main factors of time to first byte. 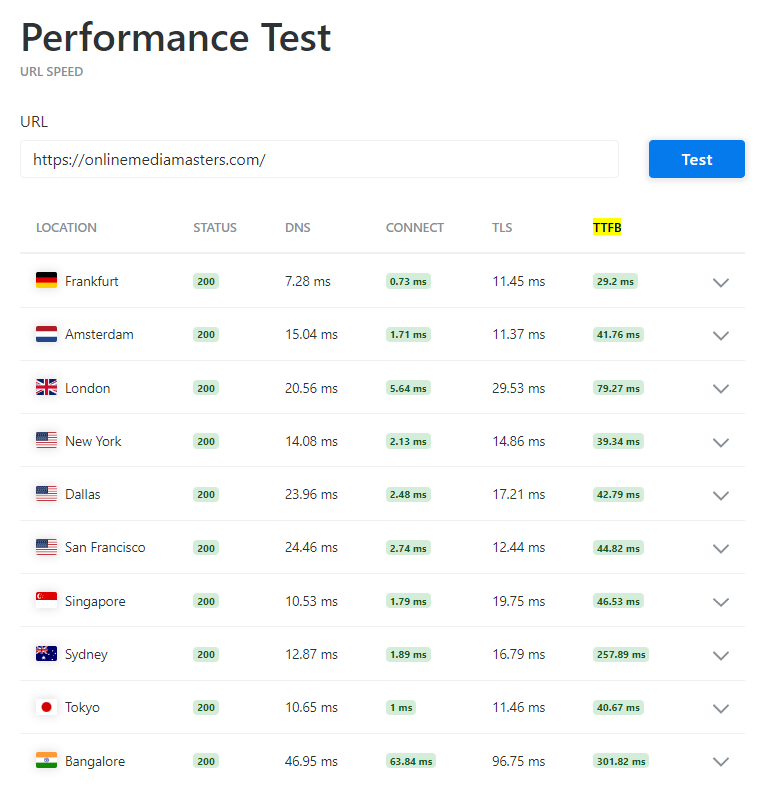 On Kinsta, many people complain about PHP workers. This is similar with SiteGround’s CPU limits where they take down your website until you upgrade. Both are common and one of the main reasons people leave (including myself when I kept having to upgrade on SiteGround). Kinsta also counts visits which often includes bots and only you only get 25,000 visits/mo on their lowest plan. They suggest WooCommerce sites start on their $115/mo plan – total ripoff.

Just a reminder that Kinsta is cloud hosting. SiteGround offers cloud hosting but I assume most people are comparing their shared plan. Cloud hosting already has a big advantage over shared, although SiteGround’s cloud hosting is arguably one of the worst options (trust me, I’ve used it).

SiteGround uses Google Cloud N2 (balanced) while Kinsta uses C2 (compute-optimized). C2 is obviously faster than N2. A big reason people were complaining about SiteGround’s slow TTFB is because even though they said it would result in “faster sites,” they originally moved to one of the lowest tier machine families. This is probably why Backlinko’s PageSpeed test showed they literally had the slowest TTFB of every host tested. It was a classic move by SiteGround: making false promises, not delivering, then denying there was a problem in the first place. A blatant lie? 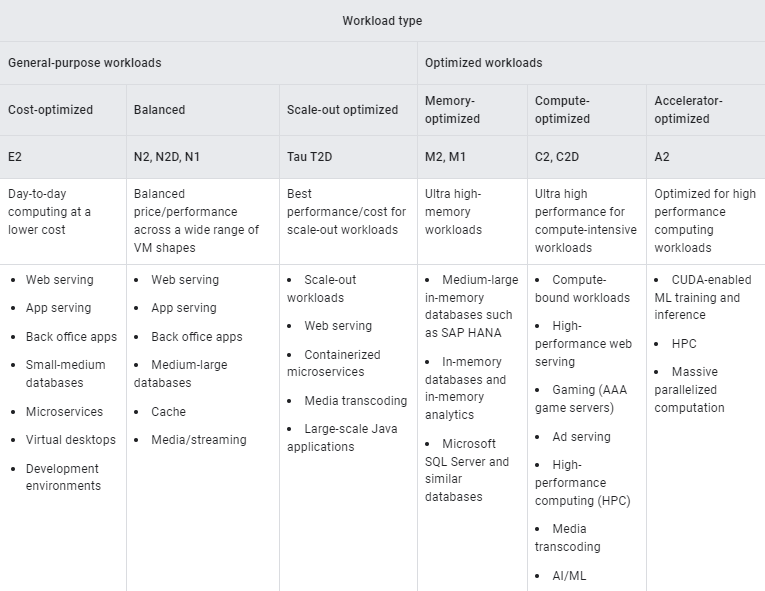 4. Storage – Both Use Slower SATA SSDs

With how expensive Kinsta is, you’d think they would use NVMe SSDs which are faster than network SSDs they actually use. Both Kinsta and SiteGround use slower SSDs which is a big disadvantage considering read/write speeds are significantly faster on NVMe. This is shown in Rocket.net’s test when they used WP Hosting Benchmarks to test moving from SATA to NVMe.

Kinsta has their MU plugin, then there’s SiteGround Optimizer.

While both do a good job with caching, they do an awful job with core web vitals. Kinsta’s MU plugin is only for caching, but SiteGround Optimizer attempts to address web vitals. However, you’re much better off using FlyingPress which is faster than both SG Optimizer and WP Rocket. At least Kinsta’s MU plugin is stable, but SG Optimizer is loaded with compatibility issues if you check the plugin reviews/support forums which the developer blames on other themes/plugins.

KinstaCDN is basically Cloudflare’s free plan with an Enterprise firewall, while SiteGround’s CDN only has 14 PoPs, compared to something like Cloudflare Enterprise with 270+ or QUIC with 75+. 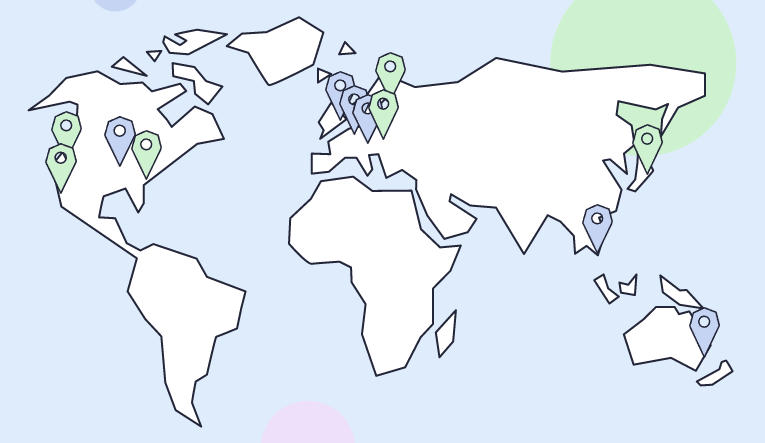 7. DNS – Neither DNS Is Faster (Or More Reliable) Than Cloudflare

Kinsta glorifies their premium DNS (Amazon Route 53) even though Cloudflare is clearly faster on dnsperf.com (and it’s free). 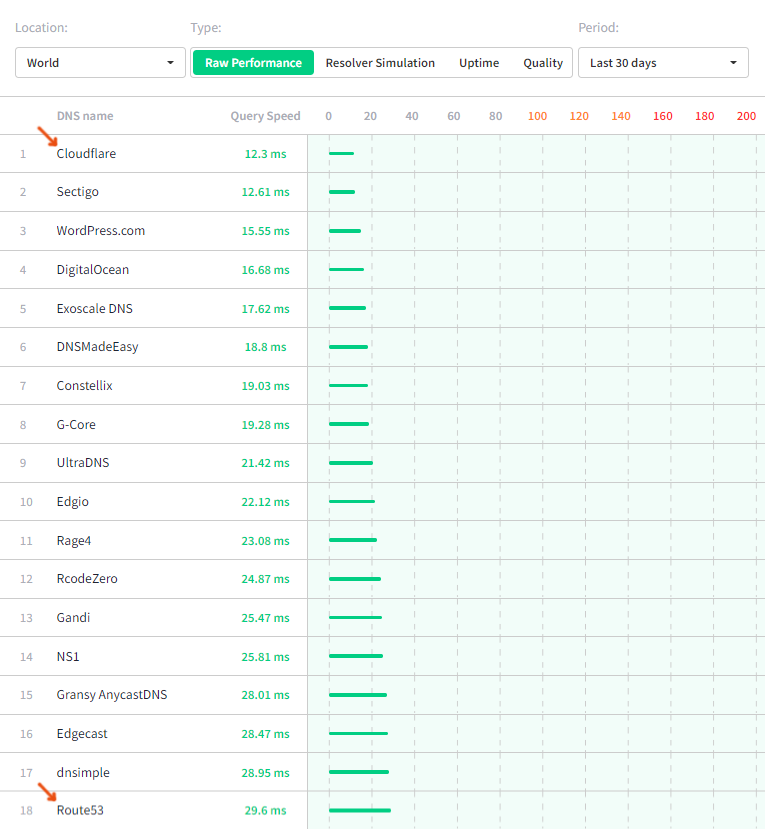 SiteGround’s DNS was previously blocked by Googlebot for 4 days. Instead of telling clients to move to an external DNS, they claimed “there is no blocking on our end” but then 2 days later, came out with a “fix.” Customers were pissed as their websites dropped in rankings or even got deindexed completely. This resulted in huge ranking drops and profit losses for their customers. You also have to use SiteGround’s DNS to use their CDN, so good luck with that. It’s not reliable.

Kinsta has 29 data centers while SiteGround only has 6.

Choosing a server location close to your visitors has a big impact on TTFB, so SiteGround definitely loses this category. A close data center does matter nearly as much if you’re using a CDN with features like full page caching and Argo Smart Routing. Otherwise, it does. You can test your global TTFB in SpeedVitals to see how much impact the geographical distance has.

9. Email Hosting – Kinsta Doesn’t Include It, SiteGround Does

One of the reasons hosts don’t include email hosting is because your website/email hosting should be separate. Email hosting takes up server resources and inodes, so besides saving money, it really doesn’t make sense to bind these together. Kinsta recommends using Google Workspace for email which is an additional expense, but it’s also the smarter choice long-term.

Kinsta also has a list of banned plugins while SiteGround doesn’t.

Both Kinsta (MyKinsta) and SiteGround (Site Tools) use their own dashboard.

MyKinsta is arguably better than Site Tools. SiteGround seemed to be in a rush to release Site Tools after cPanel increased prices, since Site Tools was released just weeks after. There were bugs, lacking features, and many complaints in Facebook Groups about SiteGround’s “not so amazing” Site Tools. MyKinsta seems a little more intuitive and you can request a demo here.

With all the issues you’ll potentially run into (related to PHP workers, CPU limits, SiteGround’s DNS getting blocked, SG Optimizer’s compatibility issues, etc). It’s no longer about whether their support is helpful… it’s about whether their hosting will cause you problems (which means you’ll need more support). The less you have to contact support, the better your host is because everything “just works.” That said, Kinsta’s support is much better than SiteGround’s.

13. Pricing – Both Are Expensive With Different Pricing Structures

Kinsta and SiteGround are both ridiculously expensive.

SiteGround’s renewal prices are about 5x intros, Kinsta charges $100/mo for Redis (and also raised prices), and it doesn’t make sense to pay this much for a mediocre hosting service. Plus, you would need a premium cache plugin on both hosts. I guess that’s mainstream hosts for you.

Most Facebook Groups are controlled by SiteGround and they use this to promote their service and remove negative posts about them. Just the other day I got an @everyone notification from the unbiased WordPress Hosting Facebook Group inviting me to Hristo’s AMA. Bunch of clowns. SiteGround also threatens to sue people who write bad reviews, so you can’t find any bad ones. 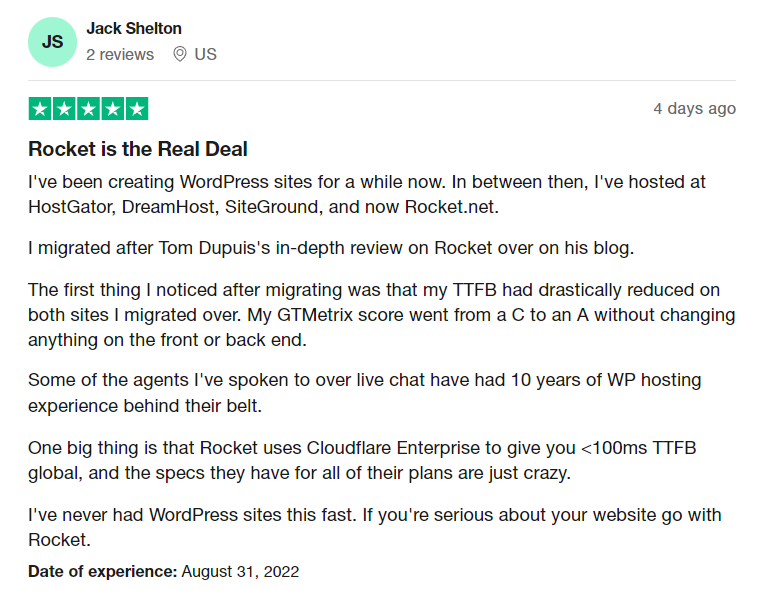 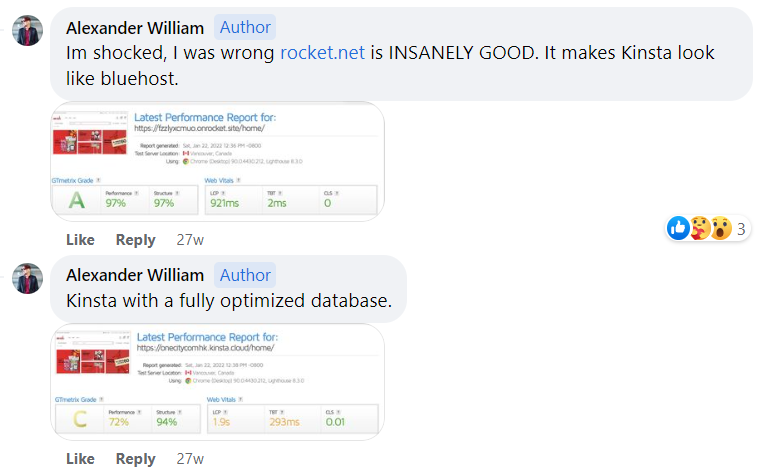 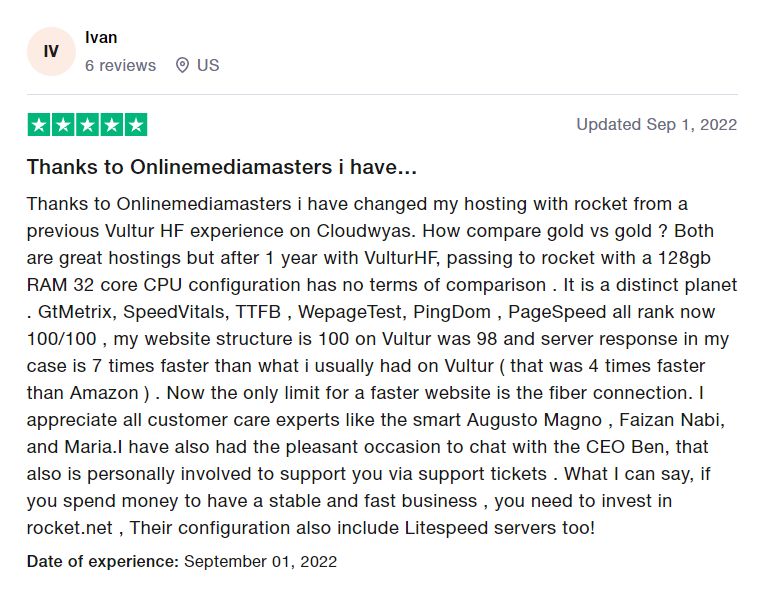 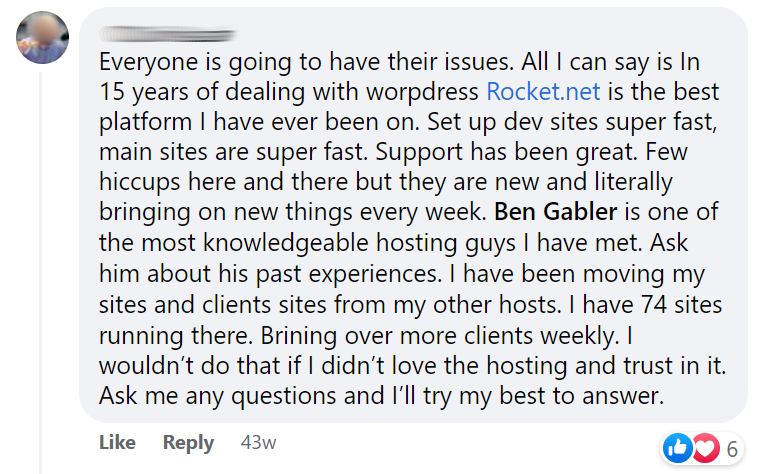 Final Thoughts – both are money-hungry companies that have gone mainstream. Don’t support them… there are way better options out there regardless of the lies spread by SiteGround, and the superficial “big brand hosting” advertised by Kinsta. You can do better.