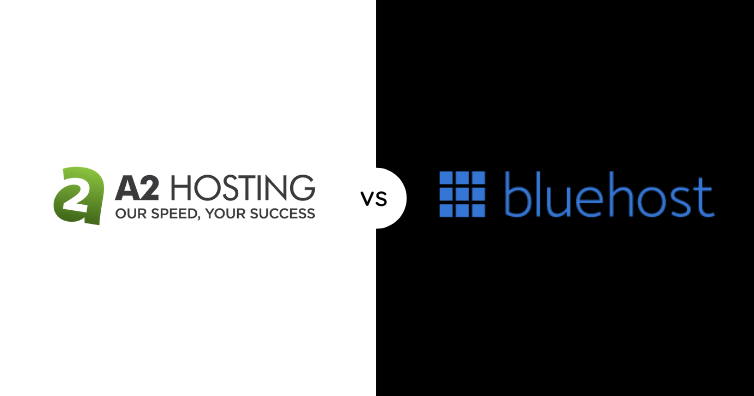 The only reason Bluehost is more popular than A2 Hosting is because of affiliates, but A2 is actually the better option.

A2 Hosting has faster load times than Bluehost especially if you use their LiteSpeed hosting which is a newer, faster type of server. This also means you can use the free LiteSpeed Cache plugin with QUIC.cloud CDN which is a fast setup (and arguably faster than similar setups like WP Rocket + Cloudflare). Even though they’re not as popular as Bluehost, A2 Hosting has better TrustPilot reviews + support. They both use cPanel with similar pricing structures and server locations. With most things being equal, LiteSpeed makes the biggest difference by far.

Bluehost is mainly promoted by affiliates, but they’re not a good choice. They’re owned by EIG who is infamous for slow TTFBs and bad support which is why their TrustPilot reviews aren’t great either. While their hosting is cheap, you should avoid using it for serious websites since it can have downtimes, long support wait times, and strict resource limits that can result in 503 service unavailable errors. Unless you’re just starting a website and can’t afford anything else, avoid Bluehost. Search Facebook Groups and you’ll see most people don’t recommend Bluehost.

1. Facebook Feedback – What People Say About A2 Hosting vs Bluehost

I recommend joining the WP Speed Matters Facebook Group to get unbiased feedback about hosting and speed optimization. Some groups are controlled by affiliates (or SiteGround) and are biased. This is one of the few groups that’s not. A2 Hosting has been rated #1 in multiple Facebook polls and generally has good feedback, while Bluehost is usually not recommended. 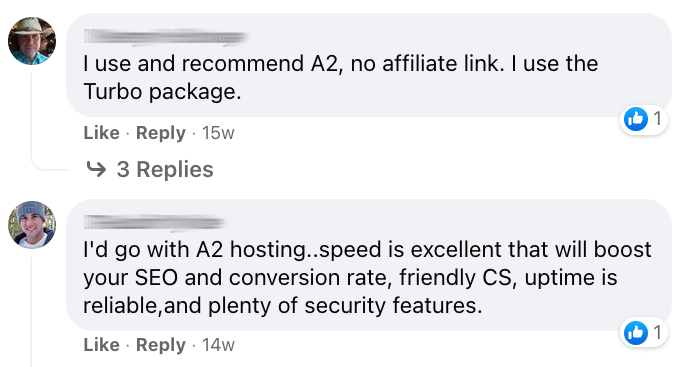 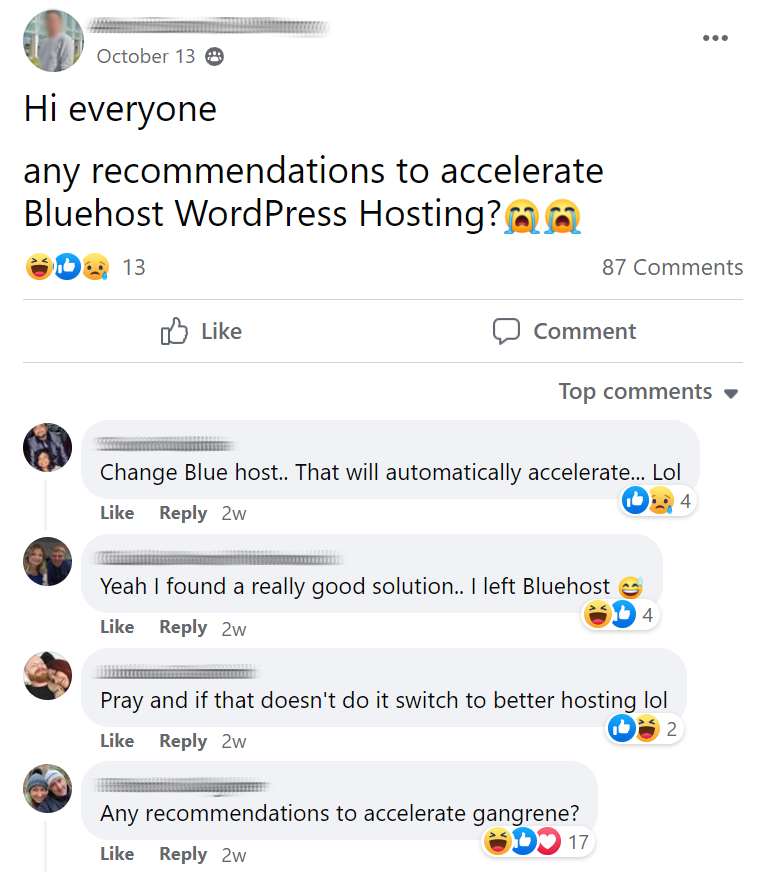 2. Server – A2 Uses LiteSpeed (On Some Plans), Bluehost Doesn’t

A2 Hosting only has 2 LiteSpeed hosting plans: Turbo Boost and Turbo Max.

These are significantly faster than Bluehost and other A2 plans. LiteSpeed is a newer type of server which is faster than Apache and traditional servers (many people have been moving to LiteSpeed in recent years). If you can afford one of A2’s LiteSpeed hosting plans, it’s worth it.

Assuming you’re using LiteSpeed hosting, this means you can use the free LiteSpeed Cache plugin with QUIC.cloud CDN. This is a very fast setup and arguably faster than something like WP Rocket + Cloudflare (since LiteSpeed Cache + QUIC uses server-level caching, HTTP/3, and built to work on top of LiteSpeed). There’s no need to pay for premium cache plugins or CDNs. Just make sure you configure the LiteSpeed Cache settings correctly and use it to setup QUIC. 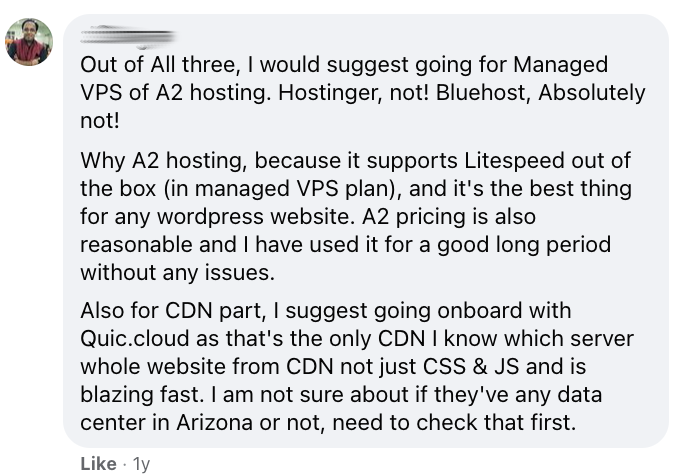 In my hosting test, I signed up for A2 Hosting’s Turbo Boost plan and Bluehost’s Plus plan (as well as several other hosting plans). I installed the same Astra Starter Site with the same exact plugins with no cache plugins or CDN. Then I measured load times in Pingdom for 1 week at 30 minute check intervals, meaning 336 individual tests were done on each website. In the test, A2 Hosting had a 587ms median load time and Bluehost loaded in 1560ms (a difference of 973ms).

In addition to the Pingdom test, I also measured load times + TTFB in various other tools like KeyCDN’s Performance Test, WebPageTest, the WP Hosting Performance Check plugin, and Google Search Console. Here are the results (including the screenshots of each host’s reports). 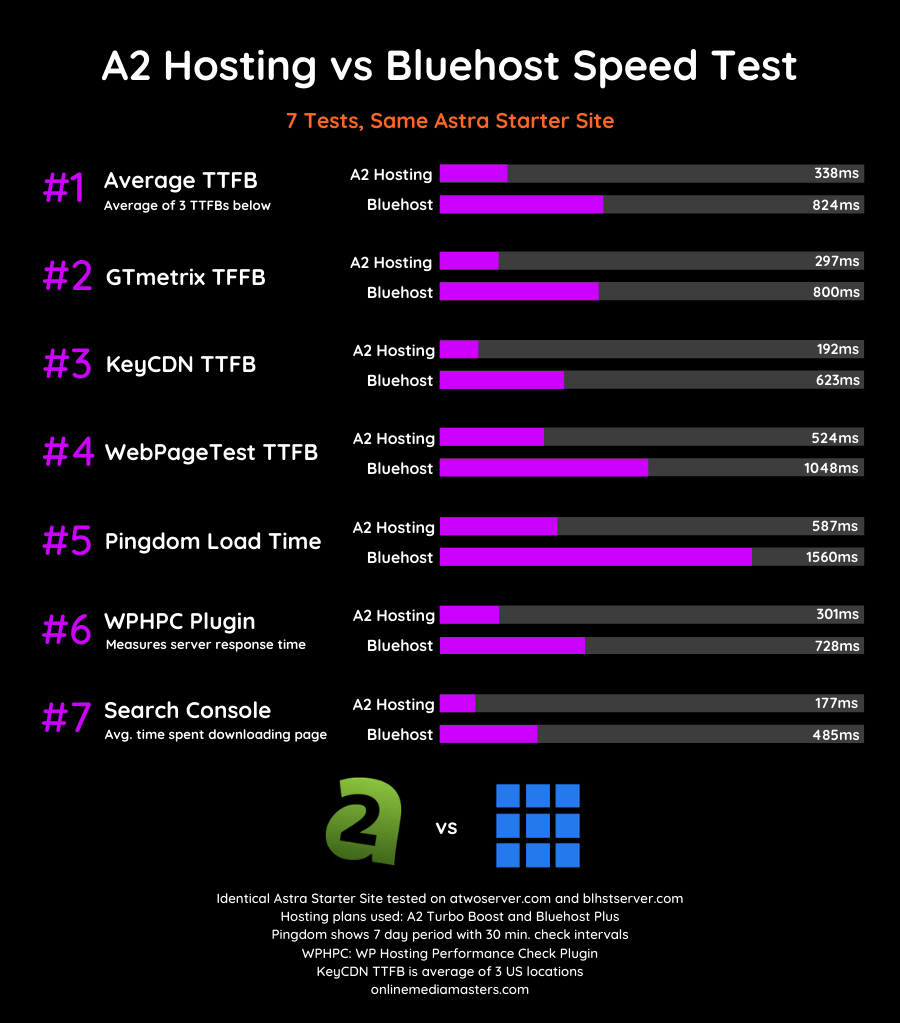 4. Support – Neither Are Great, But A2 Is Arguably Better

While support is usually something you have to experience yourself, A2 Hosting has much better TrustPilot reviews than Bluehost. However, you’re not going to get exceptional support with either host (this is something you usually have to pay extra for with “premium” hosting). 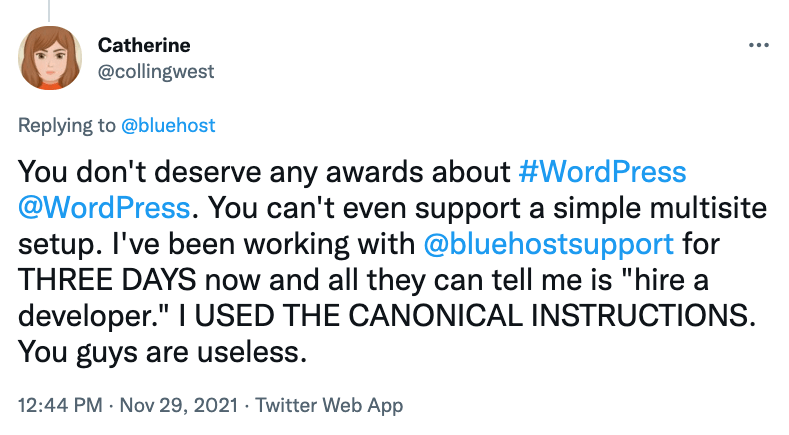 For better support with a similar price and LiteSpeed, I recommend NameHero.

5. Dashboard – Both Use cPanel

Both A2 Hosting and Bluehost use cPanel.

This is a bonus since many hosts started using their own custom dashboard once cPanel increased prices (like SiteGround and Hostinger). cPanel is more universal and user-friendly, so you know what to expect. Installing WordPress, SSL, Cloudflare, and other basic things are easy. 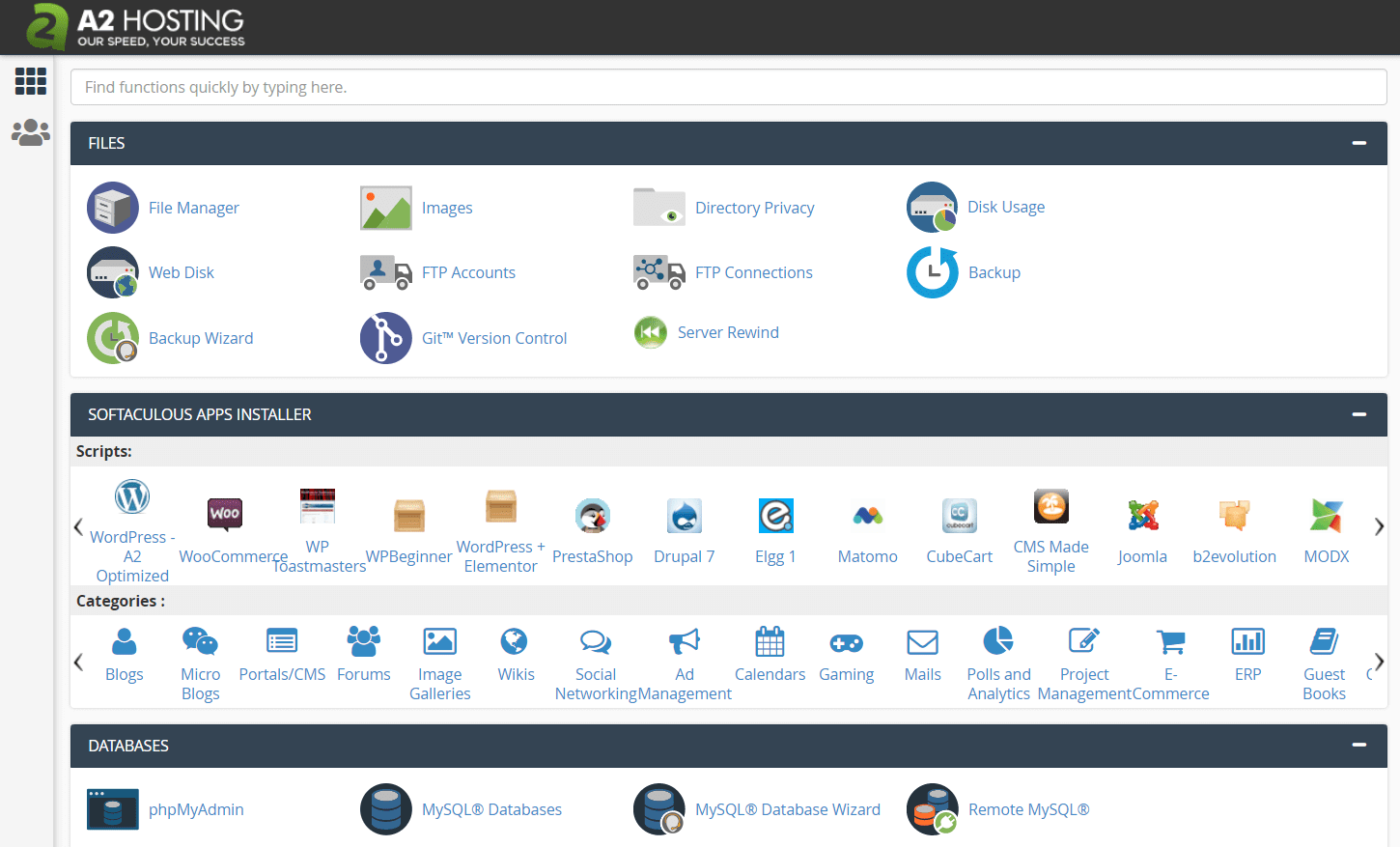 6. Uptimes – Both Can Have Frequent Outages

Uptimes aren’t great on either A2 Hosting or Bluehost.

Bluehost’s Downdetector profile usually has multiple reported problems if you check the last 24 hours. A2 Hosting doesn’t have a Downdetector profile but has a network status page which usually has daily interruptions between all their servers. A2 Hosting had a major outage in 2019 and Bluehost had one in 2016, so I wouldn’t consider either one good when considering uptime.

A2 Hosting only has 4 data centers while Bluehost has 6.

8. Security – Neither Host Has Excellent Security

Trying to stay honest here, neither A2 Hosting or Bluehost have excellent security.

In 2019, A2 Hosting had a ransomware attack which affected their Windows hosting servers. Back in 2015, Bluehost and other EIG brands were hacked after being targeted for hosting terrorist websites on their servers. Even though companies say they have great security, you should really do your research on their incident reports to get to the truth. I always recommend going through your own WordPress security checklist and making sure your site is protected. 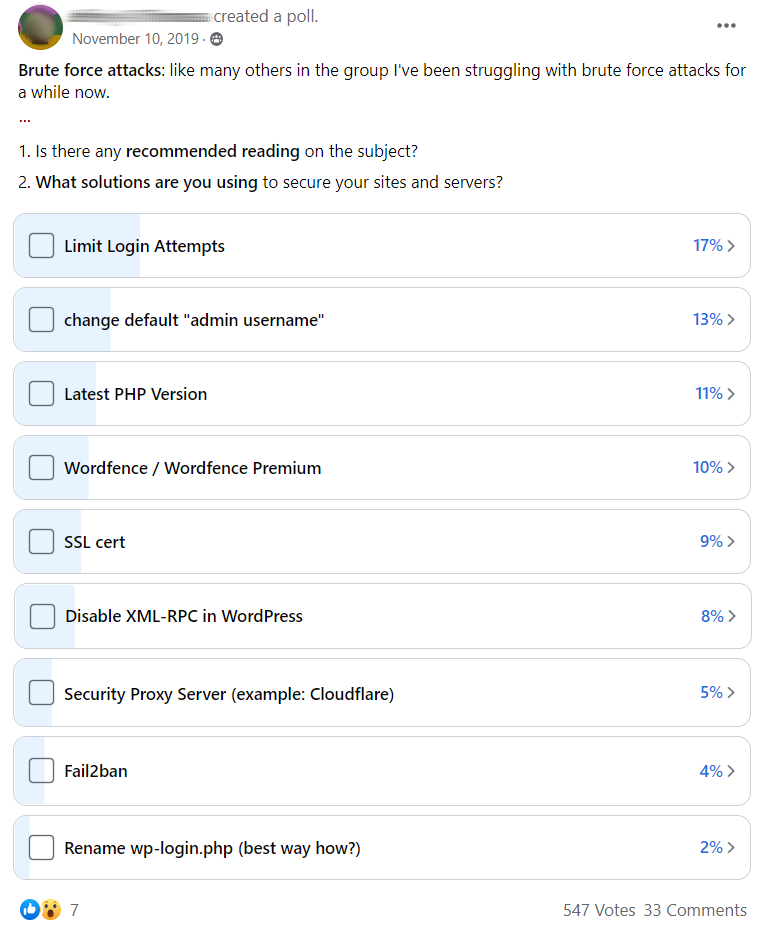 9. Migrations – Both Offer A Free Migration

A2 Hosting offers a free migration and Bluehost recently started offering it too.

A2 says most migrations are complete in 24-48 hours (I migrated my girlfriend’s restaurant website from SiteGround to Bluehost and it was painless). Bluehost only offers migrations on “qualifying accounts” based on things like WordPress version, PHP version, and <2GB file size. 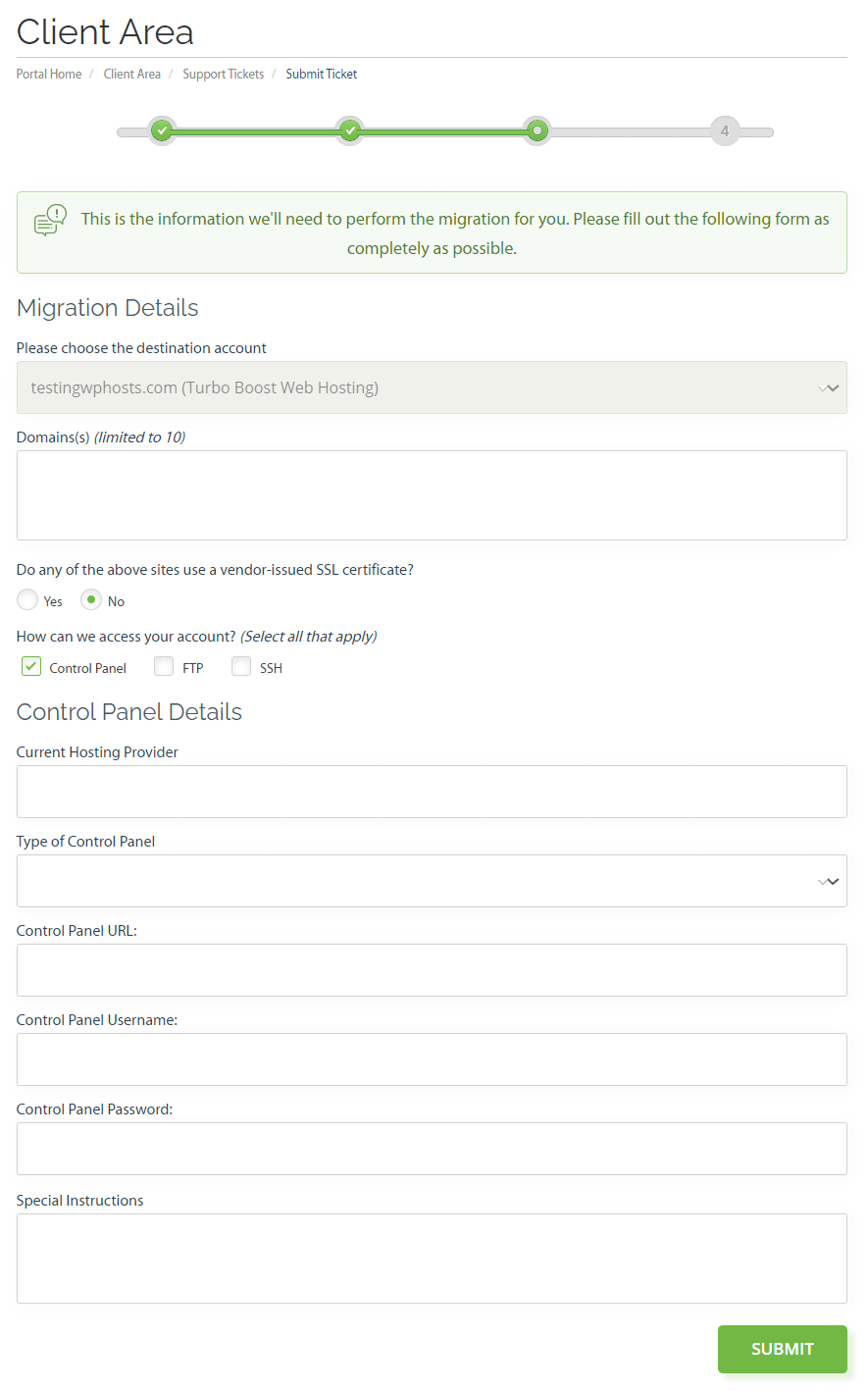 CPU limits can be brutal on shared hosting.

If your website consumes too many resources, both hosts will throttle your bandwidth. This makes your website very slow which can result in 503 service unavailable errors. A2 Hosting’s inode limits (shown on their compare page) are more flexible than Bluehost’s especially considering their Drive+ plans includes 3 times the inodes as Bluehost’s shared hosting plans.

A2 is the clear winner in this category.

Bluehost’s CPU limits can be found on their user agreement page:

11. Features – Know What You Hosting Plan Comes With

Make sure to go through each host’s features page to fully understand what each plan comes with. Some plans come with staging, automatic backups, and LiteSpeed, while other plans don’t.

12. Pricing – Both Are Cheap With Higher Renewal Prices

Both A2 Hosting and Bluehost offer cheap intro prices with high renewals.

A2 Hosting makes you sign up for 3 years to get the cheapest price while Bluehost is only for 1 years (you can still sign up for 3 years with Bluehost at a somewhat discounted price). Then once it comes time to renew, the price jumps significantly. This is standard with shared hosting.

13. TrustPilot Rating – A2 Hosting’s Rating Is Much Better

A2 mostly has complaints about their migrations, support, billing, bad terms of service, and unstable servers. Ironically, Bluehost has nearly all the same types of complaints. You can filter by the bad reviews and read them yourself, but Bluehost definitely has worse overall reviews.

14. Winner: A2 Hosting Is Better Than Bluehost

A2 Hosting is clearly better than Bluehost regardless of popular opinion especially between LiteSpeed servers, LiteSpeed Cache + QUIC.cloud, faster servers, and higher inode limits. The only people promoting Bluehost are aggressive affiliates, but they make everyone out to look perfect. I tried to write an unbiased A2 Hosting vs Bluehost comparison so you can make the right choice. If you’re willing to spend a little more, NameHero and Cloudways are even better.