Did you know most hosts have a “specs page” listing the fine details of each plan?

Well, when you compare NameHero’s specs and pricing to other hosts, you’ll realize why NameHero is getting so popular. Here are the spec pages for SiteGround, Hostinger, A2, Cloudways, and Bluehost. Do your own research. You’re going to see four key differences:

Why more people aren’t using NameHero is beyond me. Their network status page usually has less scheduled maintenance / incidents and support is actually solid for the price you’re paying, although that’s something you have to experience yourself. You can check out Ryan’s YouTube videos (their CEO) who is a genuinely down to earth guy. The one main con is their data centers are only located in the US + Netherlands. If that’s where your visitors are, I give NameHero a +1.

Affiliate Disclaimer: I use affiliate links to NameHero, but you won’t find 1 single affiliate link on my blog to SiteGround, Hostinger, Bluehost, and other low quality hosts.

Even though all 4 hosts below use LiteSpeed, they don’t give you the same amount of CPU/RAM. Let’s take a look at each hosts “spec page” and see whether you’re actually getting a good value. 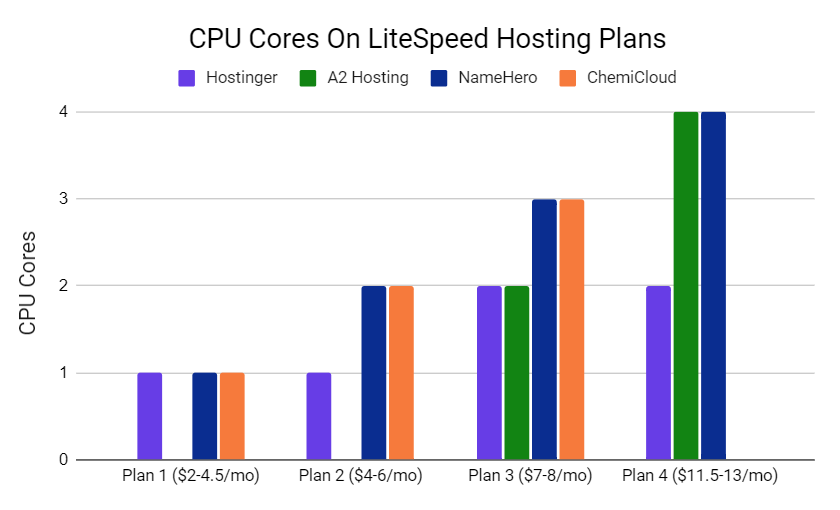 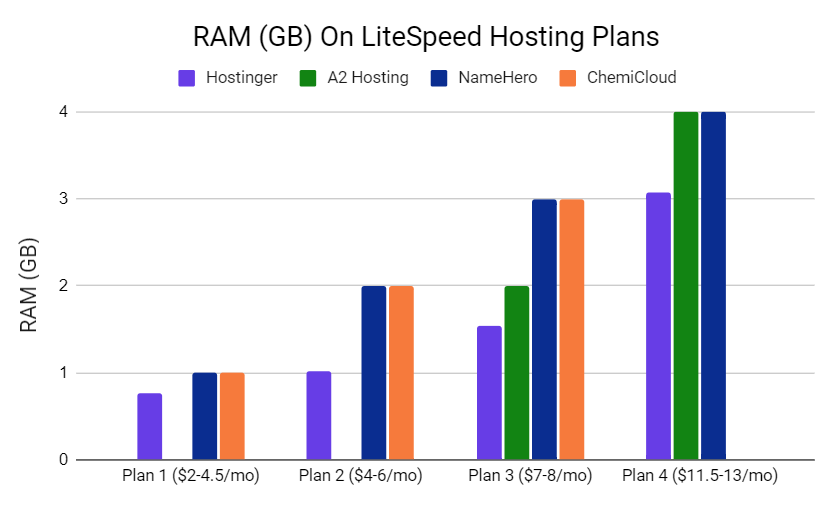 Hostinger is “cheap” because you’re basically paying $1-2 less on each plan for about half the CPU/RAM, which makes Hostinger’s WordPress hosting the most expensive out of the 4 options: 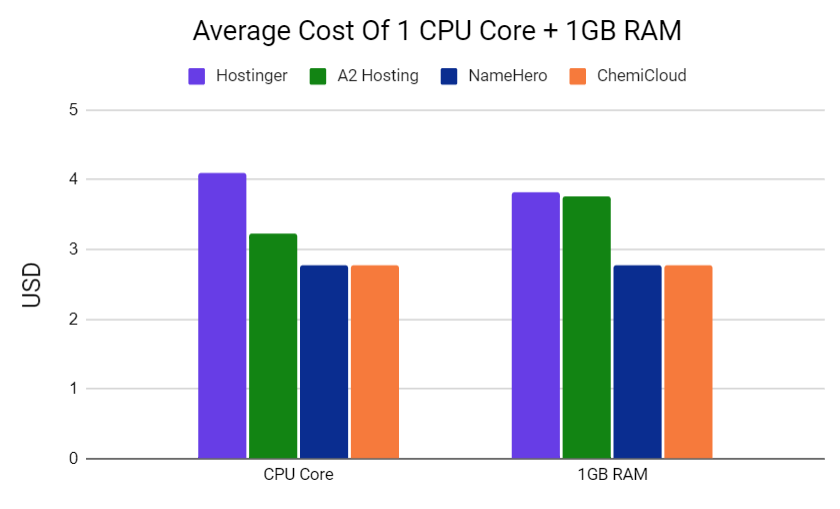 Referring to CPU/RAM, NameHero and ChemiCloud are a better value than A2/Hostinger.

NameHero’s data centers are in the US (Michigan, Arizona, Missouri) and EU (Amsterdam).

You should only use them if your visitors are geographically close to US/EU. Otherwise, I’d use ChemiCloud which is very similar to NameHero in terms of LiteSpeed, cPanel, CPU/RAM, and price. But they have data centers in several other countries with a solid 4.9/5 TrustPilot rating. 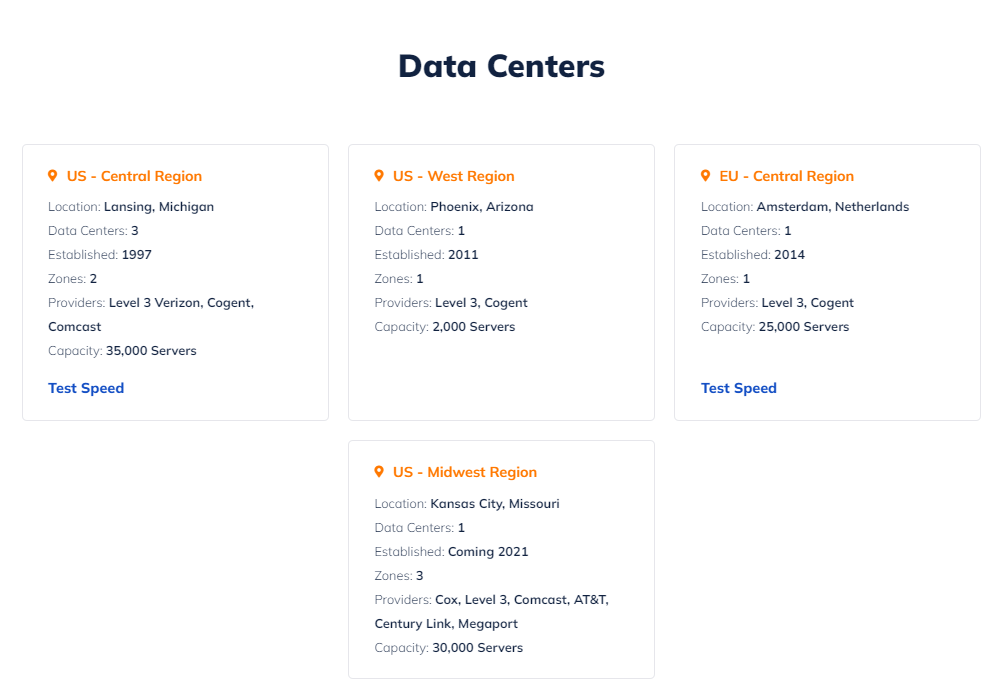 I usually recommend the Turbo Cloud plan for 3 years which is $287.28.

This gives you 3 CPU cores, 3GB RAM, NVMe, and 500k inodes (if you’re on a budget, you could get 1 year of their cheapest Starter cloud plan for $39.42). You have to sign up for 3 years to get the cheapest price, so if for some reason you’re not happy, make sure to cancel within 30 days. 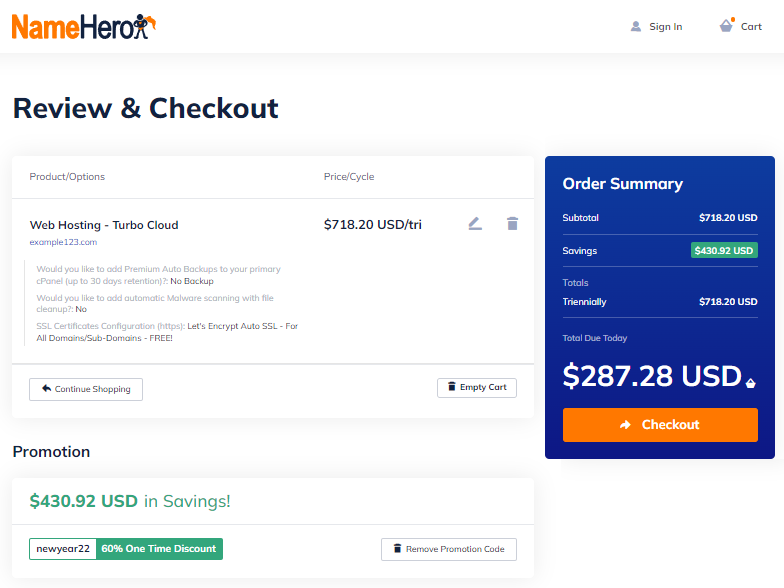 Change Nameservers – once signed up, skip to 42:12 which shows you how to change nameservers (only needed if you bought a domain somewhere else). This is found in your dashboard under domains → three dots → manage nameservers → use custom nameservers. 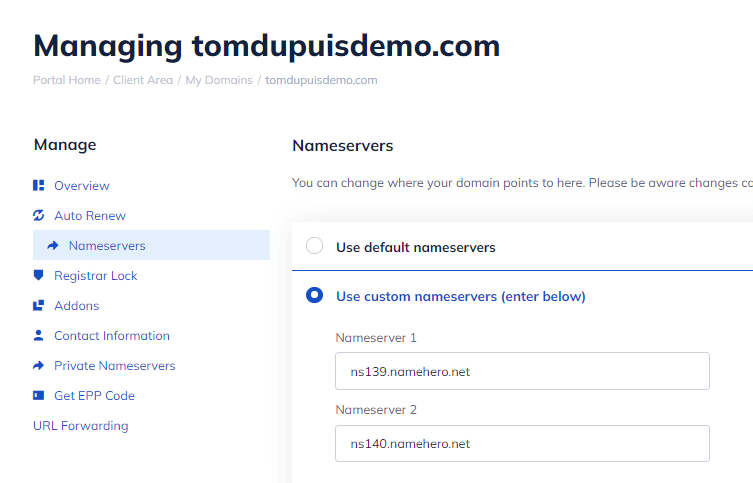 Install WordPress – login to cPanel in your NameHero dashboard and search “WordPress Manager by Softaculous.” Make sure to leave the directory field blank and use HTTPS (SSL is installed automatically). Click Install, add your WordPress login details, and install WordPress. 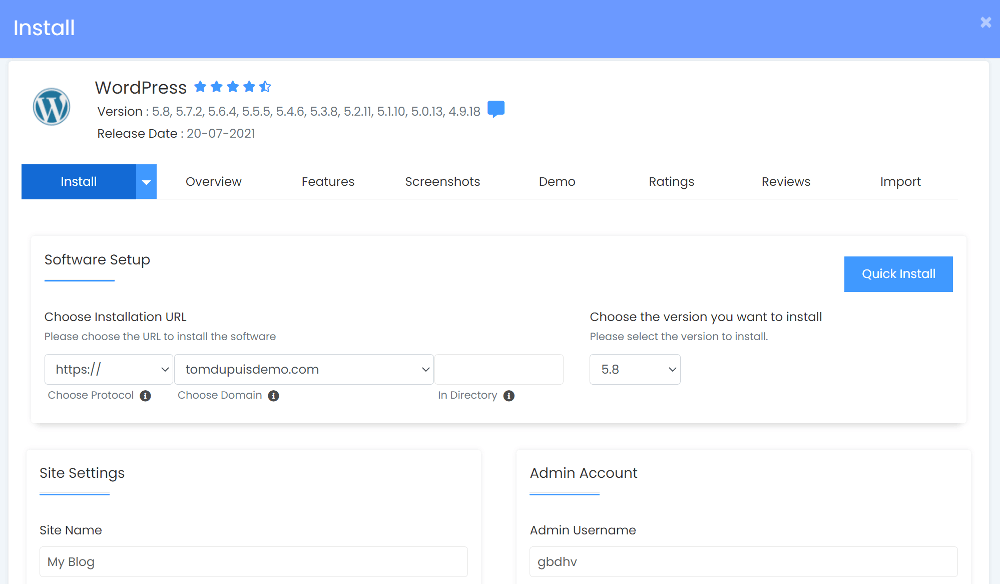 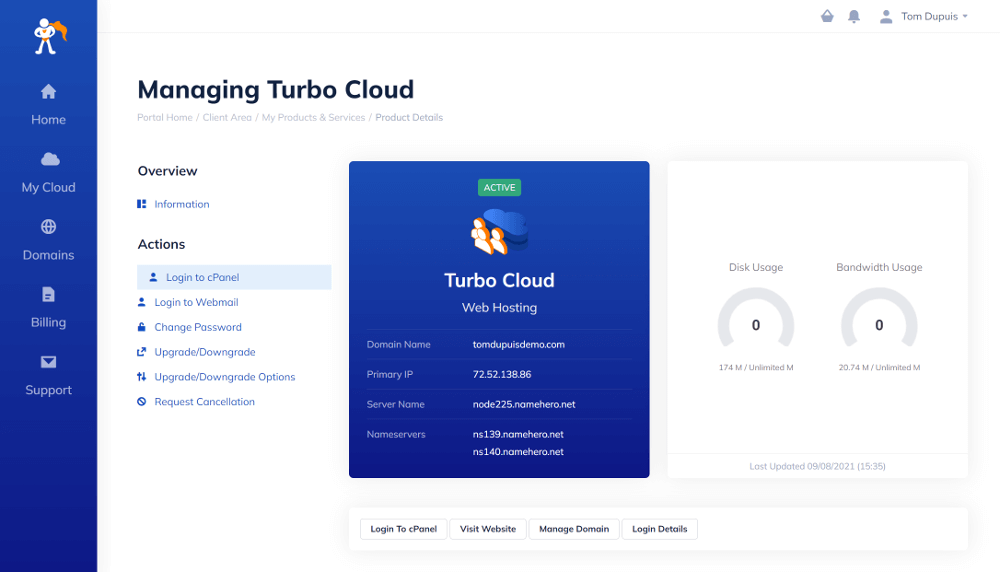 You can request a free migration by opening a ticket.

6. LiteSpeed Server On All Plans

Unlike A2 Hosting which only uses LiteSpeed on higher plans, NameHero uses it on all plans.

The LiteSpeed server + LiteSpeed Cache + QUIC.cloud combo is arguably the fastest (and cheapest) shared hosting options now. There’s also a less chance of CPU spikes since it’s more efficient. The polls below were taken in 2020 but since then, even more people started using LiteSpeed, which you can tell because the LiteSpeed Cache plugin now has 3+ million installs.

LiteSpeed Cache is better than WP Rocket and SiteGround Optimizer because: 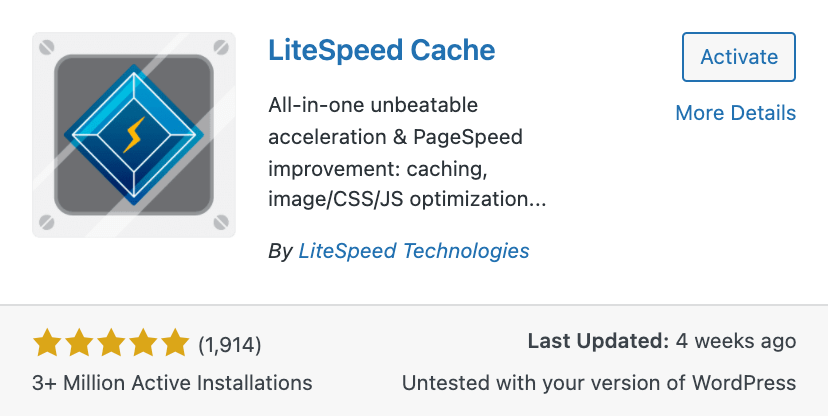 LiteSpeed Cache Settings – I have a full tutorial on configuring LiteSpeed Cache but I added the “best” settings below in a gallery (of course the best settings completely depend on your website, so take these as a starting point). You’ll definitely want to go through the full tutorial.

Then activate it in LiteSpeed Cache’s object cache settings. 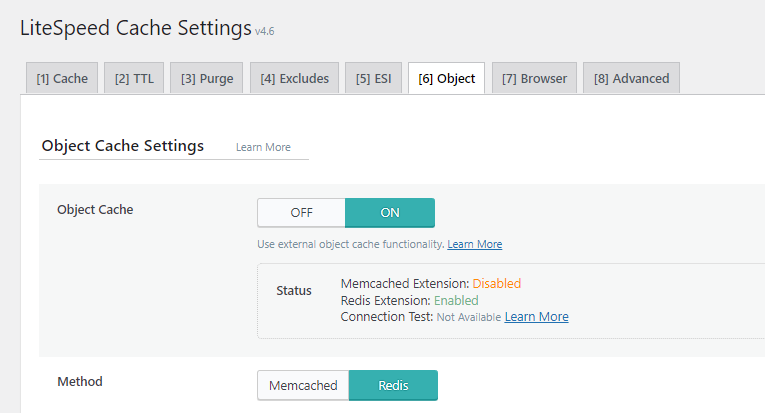 QUIC.cloud’s free plan only uses 6 PoPs without DDoS protection while their standard (paid) plan uses all 73 PoPs with DDoS protection. It costs $.02-$.08/GB and is a credit-based system.

Which means if for a paid CDN, you should definitely be using QUIC.cloud. But for a free CDN, you’re probably better off using Cloudflare.

Why You Should Use QUIC.cloud

Ryan from NameHero already made a video on setting up QUIC.cloud with LiteSpeed, but I listed the steps below as well. There’s a lot of good stuff there and I recommend watching it.

Step 1: Enable QUIC.cloud in LiteSpeed Cache’s CDN settings (CDN Mapping should be off).

Step 2: In the General settings, click “link to QUIC.cloud.”

Step 3: View the QUIC dashboard, sign up, and your domain will be added automatically.

Step 4: Click your domain and go to CDN → Enable CDN.

Step 6: Verify QUIC.cloud’s CDN is working. You should see a confirmation message in your QUIC.cloud dashboard (i.e. Using DNS when using QUIC.cloud’s DNS). Eventually, you’ll see traffic is served through QUIC.cloud in the Analytics settings. You can also do an HTTP/3 Test.

Step 7: Configure the “CDN Config” settings in QUIC.cloud. Here are a few tips:

Step 8: Upgrade to the standard plan which uses all 70 PoPs and DDoS protection. You get a certain amount of free monthly credits, then it costs $.02-$.08/GB depending on which regions you select. QUIC is also needed for UCSS, CCSS, and LQIP, so it’s definitely worth upgrading IMO.

Here are a few extra speed tweaks that can be found in your NameHero cPanel under Select PHP Version (use both the Extensions and Options menu), Cron Jobs, and Hotlink Protection. 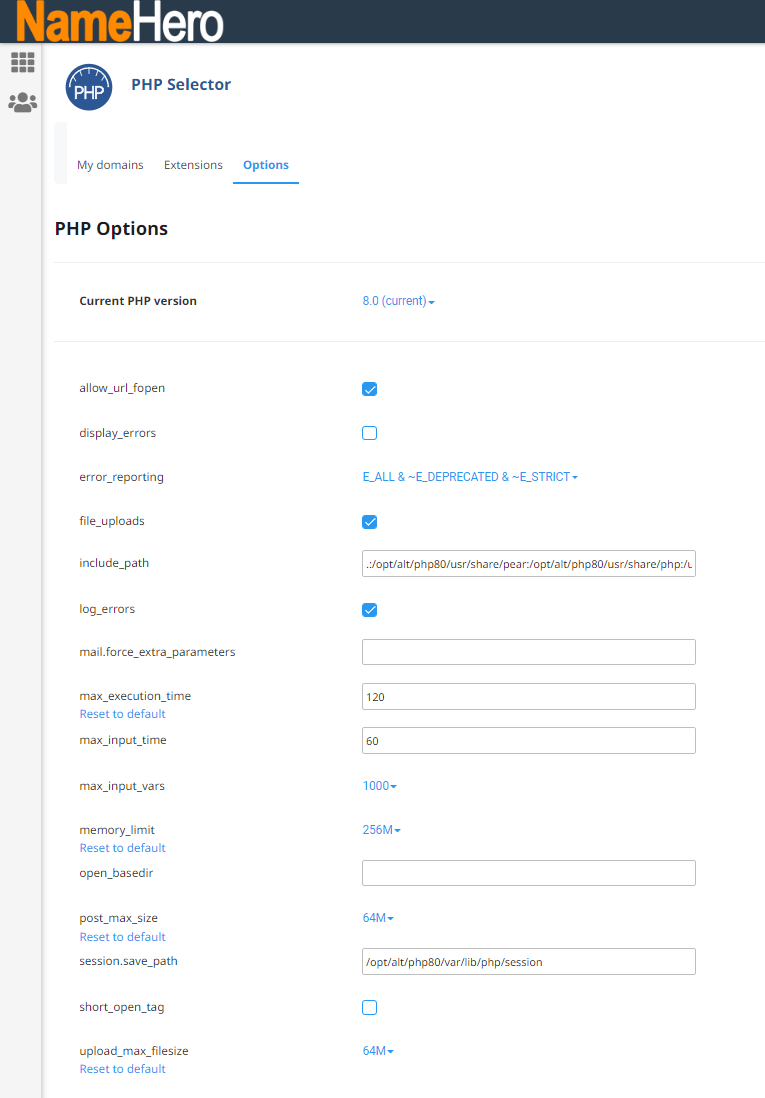 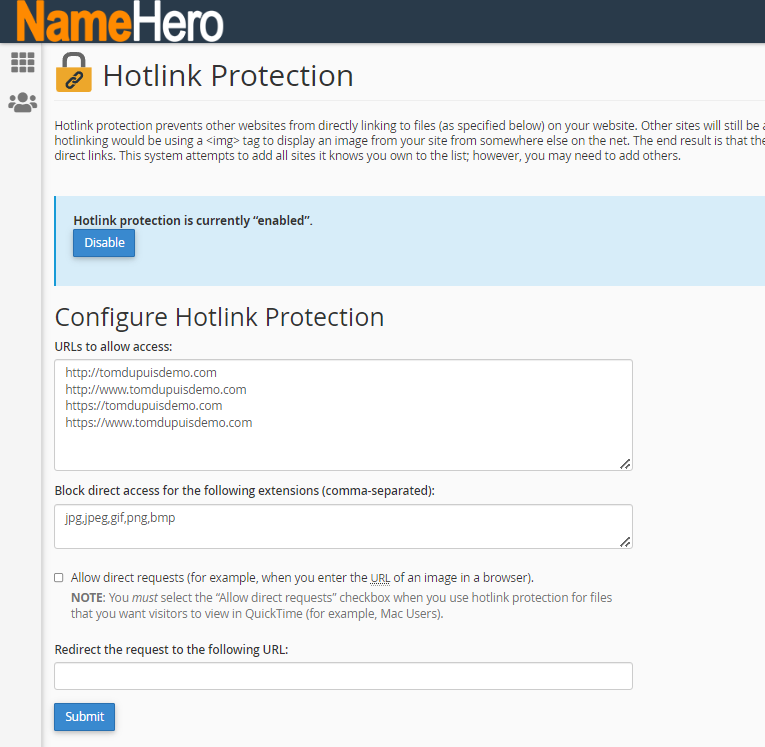 Next, go to “Cron Jobs” in your NameHero cPanel and add the following code to “command line.” Set this to run every hour and replace https://yourwebsite.com with your actual domain. 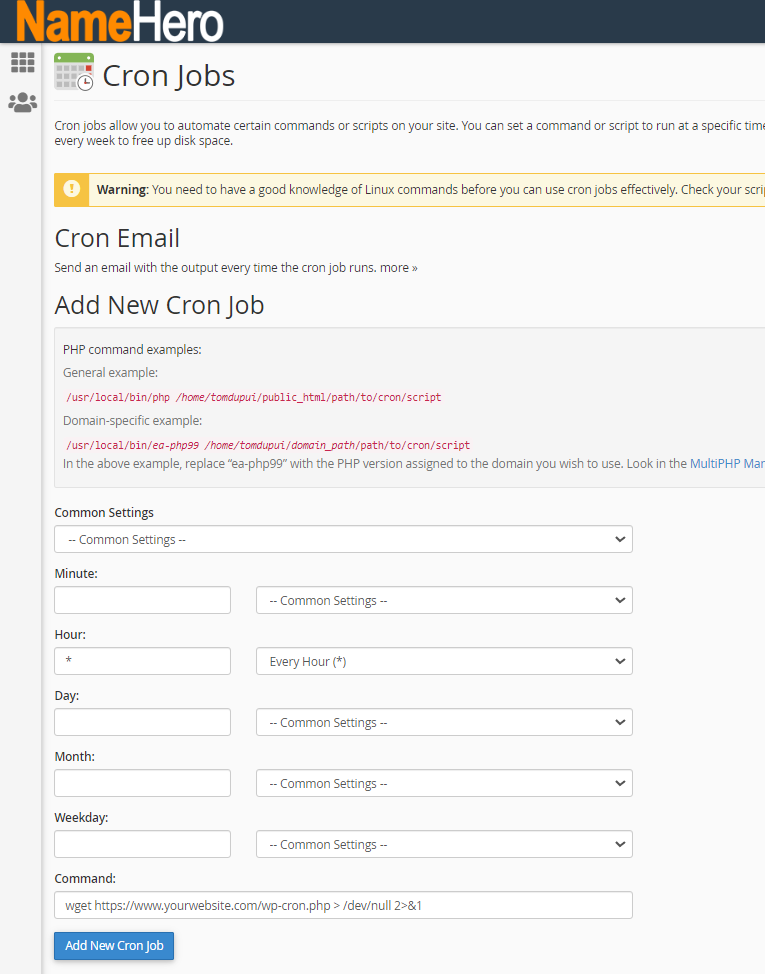 Here is NameHero’s network status page. They usually have less maintenance/downtimes compared to similar hosts, although it obviously changes depending on when you check it.

I’m not doing another BS uptime test since it depends on which plan, server, and node you’re using. Most hosts should have an uptime status page showing scheduled maintenance + major incidents. Pretty much every host has a major outage at some point, so I like to look at 4 things:

NameHero had a major outage in December, 2021 lasting 2 days. Ryan (NameHero founder) posted a detailed response. Read it yourself and make your own judgment. He takes full responsibility and it sounds like he worked as hard as he could, but that’s for you to decide.

Fun fact: On most host’s terms and conditions page, they state that scheduled maintenance does not count towards their uptime guarantee. You can advertise a 99.99% guarantee, then have as much downtime as you want as long as it’s scheduled.

How do NameHero’s uptimes stack up against other hosts?

11. Above Average Support For Cheap Hosting

NameHero’s support is actually good for the price, but obviously this is something you need to experience yourself.

They have phone, live chat, and tickets, but the biggest thing is they’ve always been helpful no matter which question I ask (without pressuring me to upgrade). This is likely why NameHero has a 4.7/5 star TrustPilot rating. I’ve only used it a few times (which is a good thing). They also keep a log of all their support’s feedback and publish this on their website, which is reassuring.

12. Shared Hosting is NOT Cloud Hosting

They need to rename all of their shared hosting plans to not include “cloud” in their names because it’s misleading and only uses isolated containers. NameHero’s managed cloud plans are cloud hosting which is why they’re more expensive. I still like NameHero, but come on now. 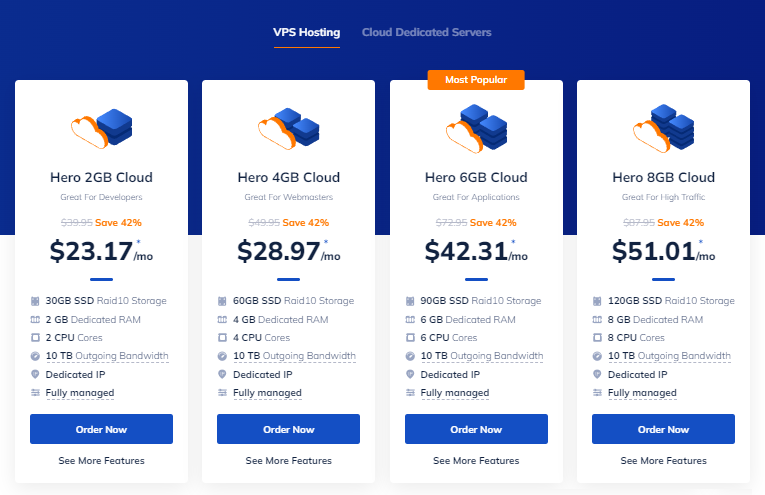 NameHero uses Security Shield to protect your website against malware, DDoS, and several other types of attack. They use a firewall that detects attacks real-time and add patches automatically. They also have a malware scanner add-on (you can activate it at checkout). I believe NameHero requires the use of two-factor authentication using Google Authenticator.

“Additionally we’re taking an enormous green initiative to be extremely efficient to help protect our environment.”

To start, we chose a location that is located underground, in what used to be an old limestone mine.  This not only provides protection from natural disasters (tornadoes not uncommon) but also natural temperature control (underground stays around ~68 degrees year round).

Inside our facility all systems are designed to be extremely efficient.  Even the lightning throughout shuts off automatically and only turns on with motion (i.e. someone walking in the hall or entering a room).

Our primary energy partner is Evergy whom we have a very special partnership with where a good portion of our supply comes from renewables (i.e. wind).  They’ve already committed to becoming carbon neutral by 2045 with 50% of all their energy being emissions-free.

We utilize Flywheel energy inside (instead of the “old school” backup UPS systems that contain chemical-based batteries):

Given we’re a cloud-based service provider, our entire infrastructure relies on virtualization, which does not use near the amount of equipment that “old school” dedicated servers use.  With over 300K sq foot expansion space possible, we don’t have to stack equipment as tight as most providers, eliminating a lot of the “dense racks” that virtualization typically creates.  This provides for even more efficient power/cooling usage.

We’re looking to create the “new age” of data centers by constantly optimizing our efficiency; utilizing what’s necessary, eliminating the unnecessary (i.e. always trimming the fat/bloat).  A good example of this is within our core network infrastructure, that utilizes new software defined network technology to operate in a spine/leaf fashion where we can collapse the “old school” three tier networking model, and thus eliminate many pieces of “old school” hardware that’s still utilized in many data centers across the country (a hypervisor can also serve as a router/firewall eliminating more hardware that utilizes power/cooling resources).

NameHero’s great, I don’t get why more people don’t use them.