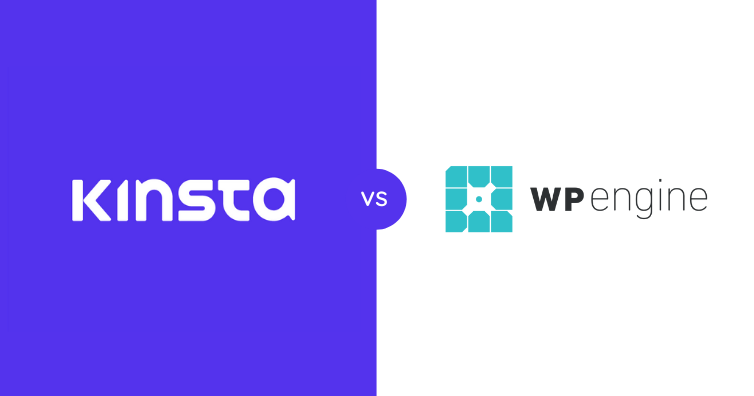 Looking into Kinsta vs. WP Engine?

Kinsta has awesome feedback in WordPress Facebook Groups. They use Google Cloud C2 servers on all plans (not just dedicated hosting like WP Engine). They use server-side caching through their MU plugin and performed faster than WP Engine in multiple speed tests. Support is world class, they have more GCP data centers, and a better MyKinsta dashboard with more features. The main con of Kinsta is their PHP worker limit which gets expensive as you scale up.

WP Engine went downhill in recent years which is a result of them being heavily influenced by GoDaddy and EIG. Their servers have gotten much slower as reflected in speed tests, support has gotten worse, and their TrustPilot reviews have also gotten worse. The cheapest plan only allows 1 WordPress install and instead of CPU limits, they allow you to go over your usage and overcharge you an unknown amount. Top it off with expensive prices and it’s just not worth it.

I suggest joining the WordPress Hosting Facebook Group and doing your research. I found a few conversations comparing Kinsta vs. WP Engine and blurred the names to keep their privacy. 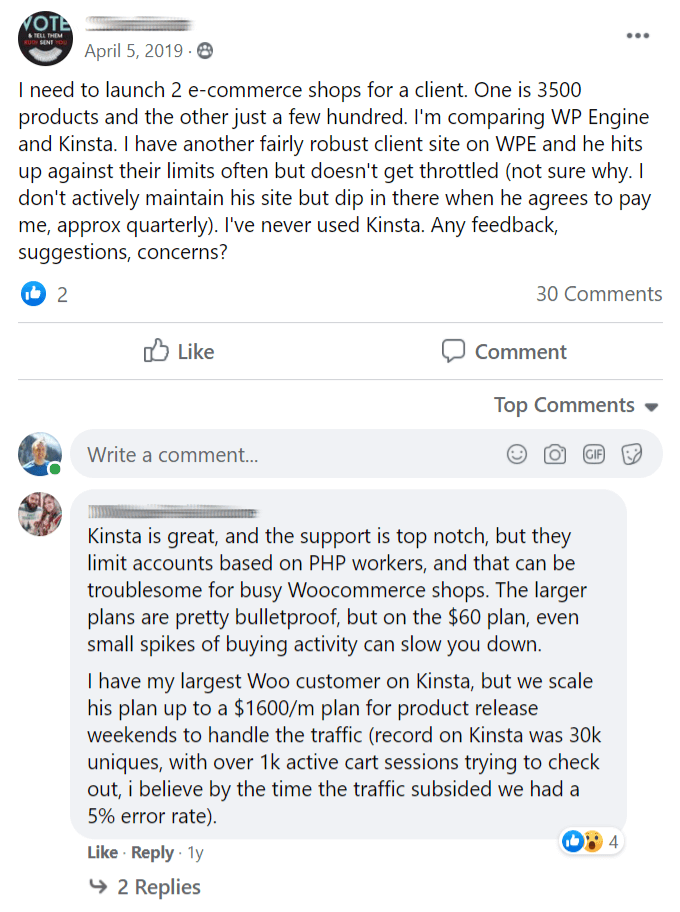 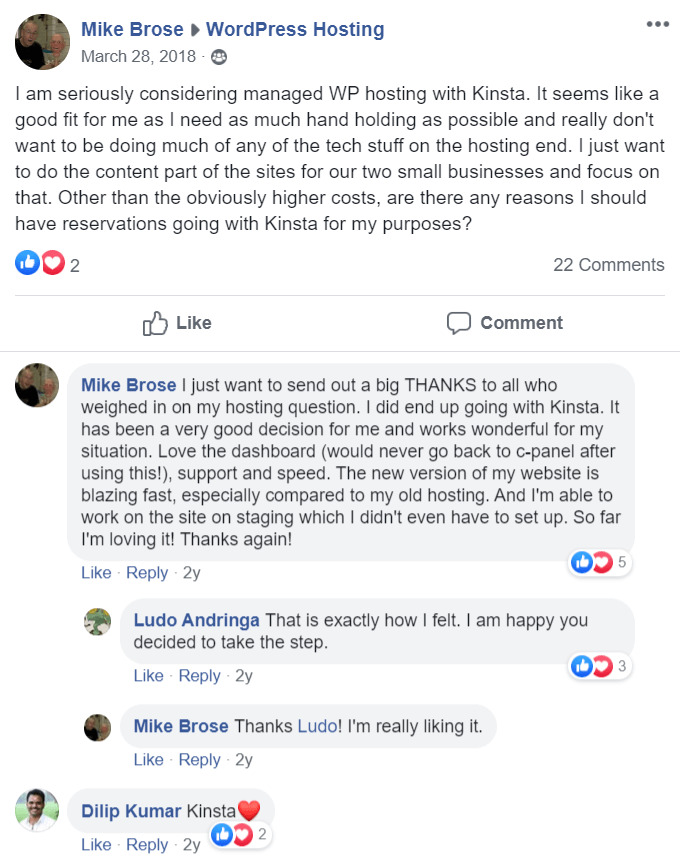 Kinsta uses Google Cloud C2 on all plans but WP Engine only uses them on dedicated plans.

I also tested Kinsta’s Starter plan vs. WP Engine’s Startup plan which have similar pricing at around $30/month. I installed the same Astra Starter Site with the same 6 plugins without caching/CDNs. While Kinsta and WP Engine’s average TTFB were similar (264ms and 274ms respectively), Kinsta’s average Pingdom load time was much faster compared to WP Engine’s. 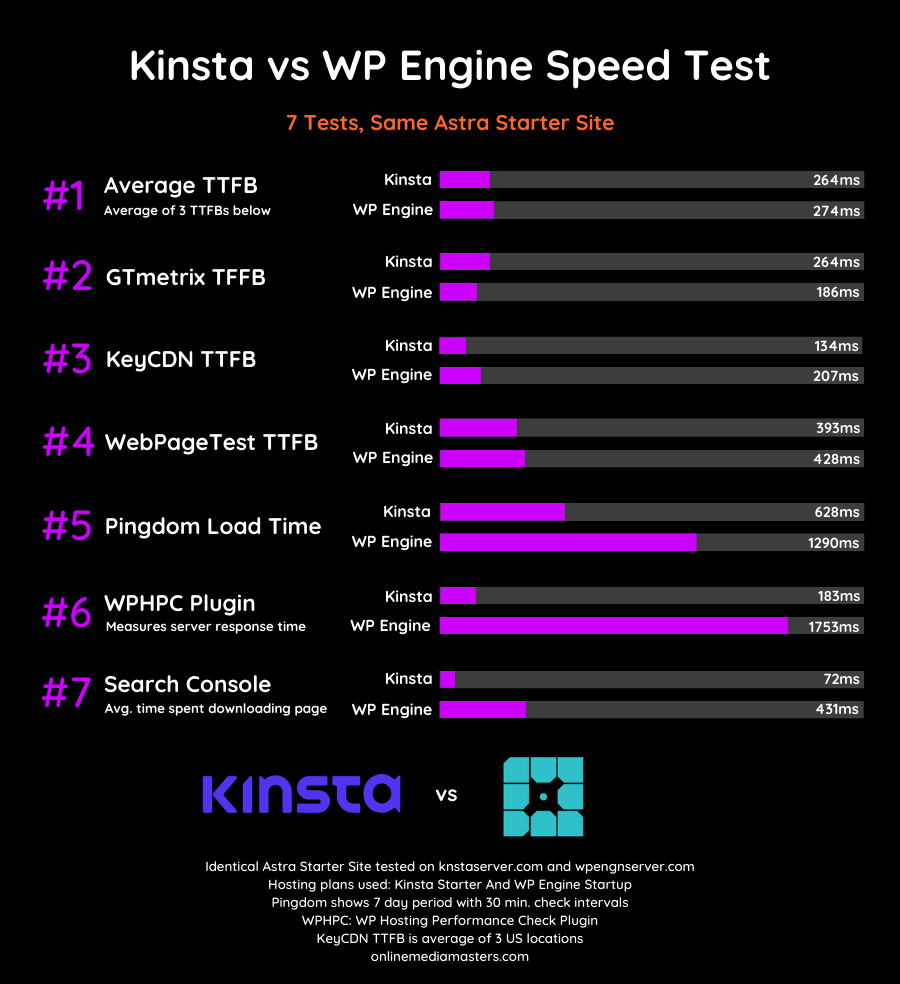 In the Pingdom test, Kinsta loaded in 628ms and WP Engine loaded in 1290ms (a 662ms difference). Each website’s load time is the average of 336 individual Pingdom tests (7 day period at 30 min. check intervals). For load times, Kinsta was almost 2x faster than WP Engine.

And if you look at Facebook Groups or Twitter migrations, there are a good amount of people leaving WP Engine for Kinsta and posting faster loads, but usually not there other way around. 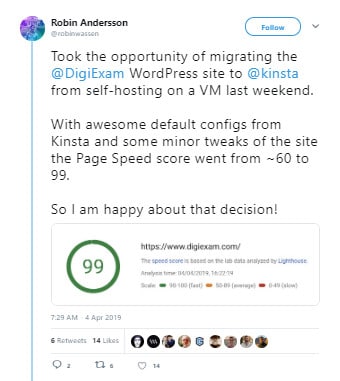 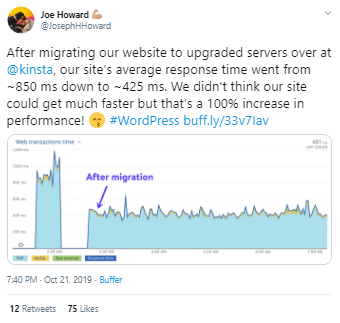 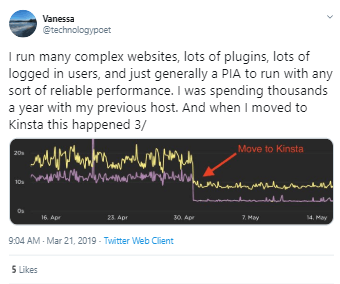 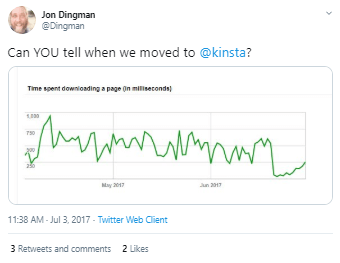 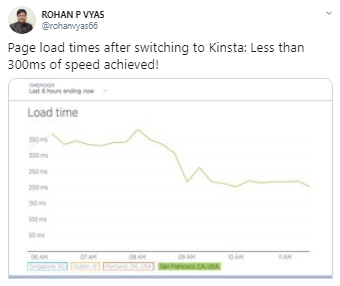 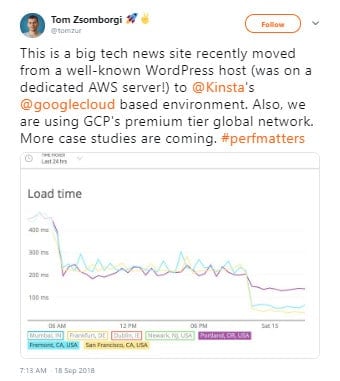 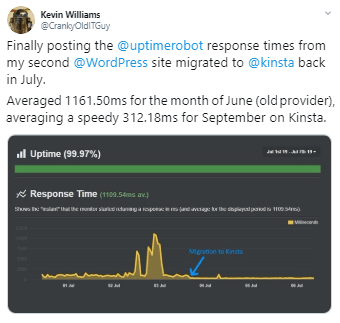 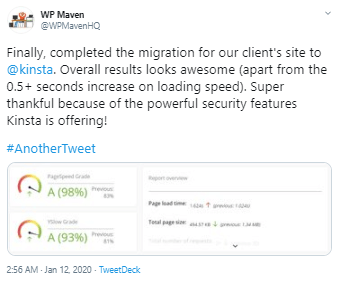 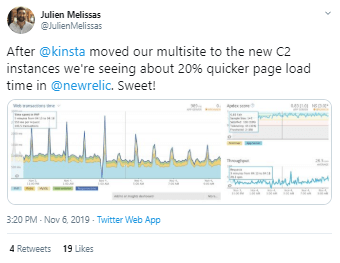 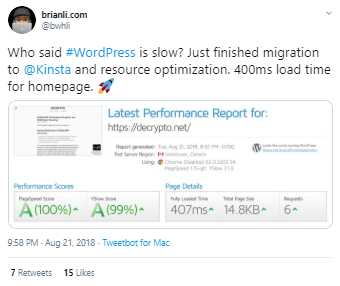 You really need to dig through their TrustPilot reviews and Facebook conversations to see the difference. You will find nearly all positive reviews about Kinsta’s support (this is partially why you’re paying for a premium hosting provider). Kinsta really does go above and beyond to help. 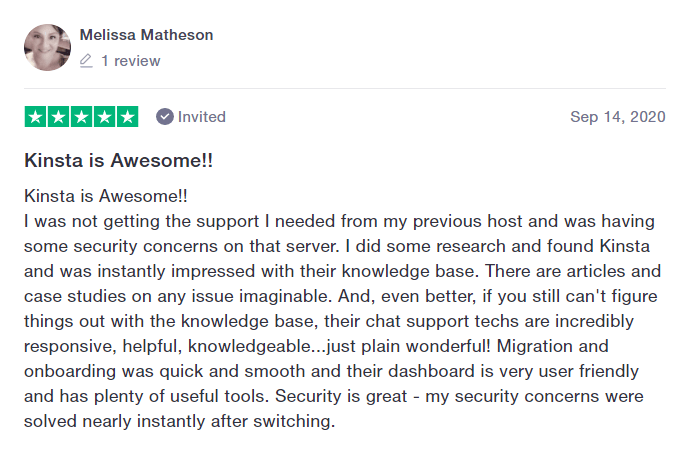 WP Engine’s support has declined over the years and it’s still bad. There have been many complaints about them not even opening support tickets, or waiting 30-80 people in the queue. It’s also annoying they ask you a bunch of unnecessary questions before addressing your issue.

Both Kinsta and WP Engine use a custom dashboard.

Kinsta’s MyKinsta dashboard is super user-friendly and you shouldn’t need to have any technical skill to manage your website here. Everything is explanatory, from creating staging sites to taking backups, installing SSL, CDNs, adding users, etc. You can request a demo here.

WP Engine’s dashboard is also user-friendly and I honestly have no complaints about it. Compared to other custom dashboards like SiteGround’s Site Tools or HostGator, it’s definitely better (but that’s not saying much). Just like Kinsta, it’s very easy to perform basic functions. 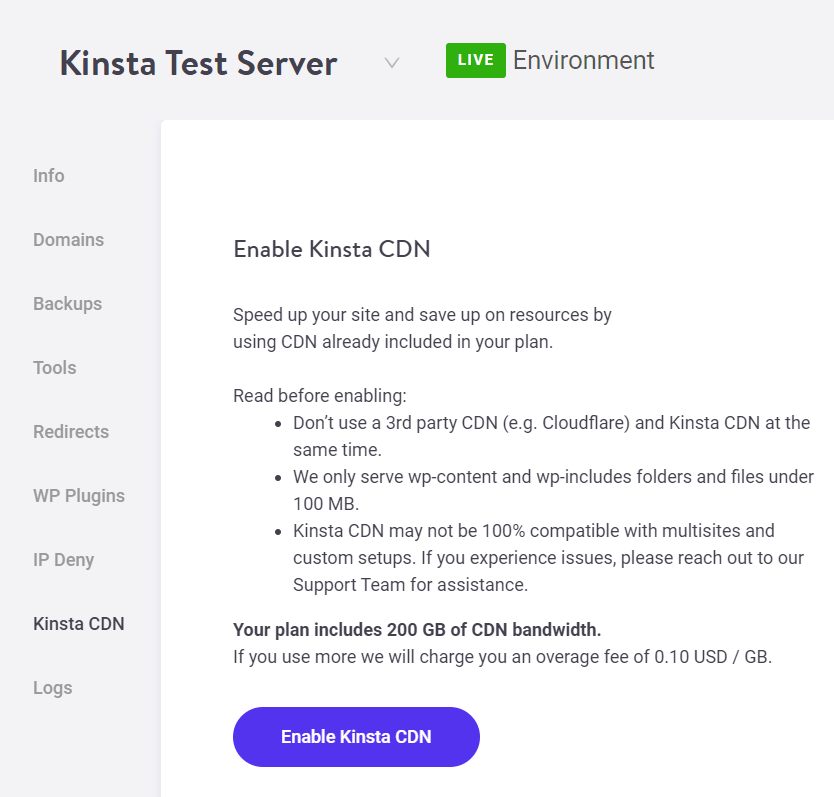 Kinsta’s plans only come with a certain amount of PHP workers. If you run a dynamic website like WooCommerce, high CPU plugins, or theme, your website will demand more PHP workers.

First, make sure you’re doing everything you can to reduce CPU on your site, especially using server-level caching, lightweight plugins, and offloading resources to a CDN. However, if your Kinsta plan is consuming too many PHP workers, you will ultimately need to upgrade your plan.

WP Engine counts visits and will overcharge you if you exceed the number of monthly visits included with your plan. These visits are counted by WP Engine’s Log Analysis – not Google Analytics and other popular analytics tools. So even though your Google Analytics may show a lower number, WP Engine can charge you for extra visits and you could end up with a hefty bill.

These “visits” are more like pageviews and also count when you visit any page inside the wp-admin. As you can imagine, these pageviews can add up very quickly and become expensive. 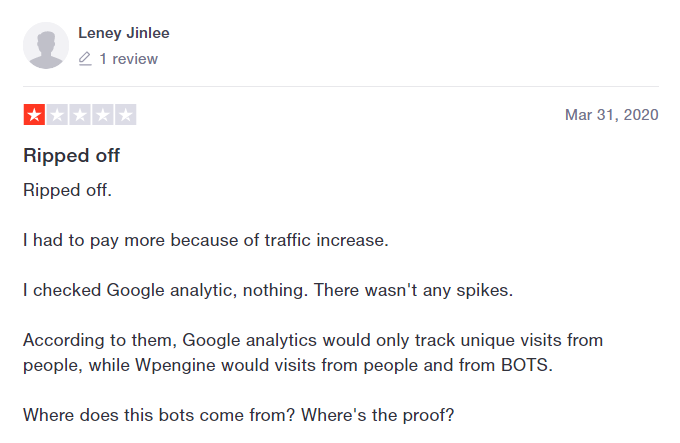 6. Email Hosting – You’ll Need To Use A Third-Party Service

Kinsta does not offer email hosting while WP Engine does, but it’s very limited.

Keeping your web/email hosting separate is good anyway since email hosting can consume resources, inodes, etc. You’ll want to use a third-party service like Google Workspace on both.

Kinsta bans certain plugins and so does WP Engine.

Most of these are caching, backup, and security plugins which you shouldn’t need in the first place. Both hosts offer their own server-side caching system, backups, and security features.

Kinsta offers unlimited free migrations from certain hosts. Each Kinsta plan also comes with a specific amount of premium migrations if you need to move away from another host not listed. The migrations are done by a real person from Kinsta’s team so you can hold them accountable.

WP Engine doesn’t offer a migration service at all. Instead, they have an Automatic Migration plugin. To their credit, the plugin has good reviews, most of which say the plugin works great.

In most cases, your server shouldn’t go down.

There have been very few complaints on WP Engine and virtually none on Kinsta. 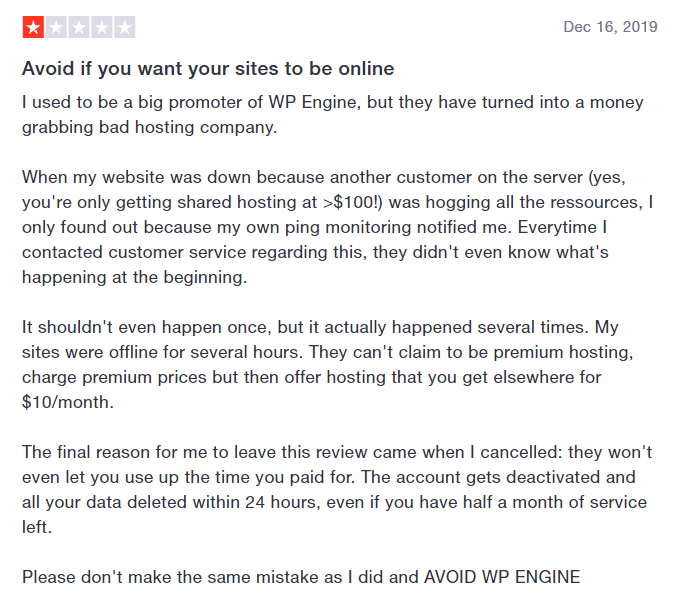 Kinsta uses enterprise-level firewall and DDos protection through Cloudflare, while on WP Engine only has the firewall

WP Engine also had a major security breach in 2015 when customer’s credentials were exposed. Even though there was no evidence credentials were used in a harmful way, it forced WP Engine customers and webmasters to reset up to 5 passwords (wasted time). On top of it, WP Engine didn’t have two-factor authentication implemented in the systems, making it worse.

Kinsta is a newer hosting company but hasn’t had any security breaches to date. They even have a hack fix guarantee. Kinsta takes security seriously and has dedicated pages listing their security technologies (2FA, GeoIP blocking, limited login attempts, full encryption, LXCs/LXDs).

Kinsta has 24 data centers scattered through the globe while WP Engine has 20 data centers. However, only 11 of these are available when using Google Cloud servers. So depending on which WP Engine plan you choose, you could be more limited on server locations. Kinsta wins.

WP Engine’s poor reviews are mainly about their slow/terrible support, overcharges (and false stats), high prices, faulty service, and not allowing the remainder of the service when canceling.

The winner is definitely Kinsta. 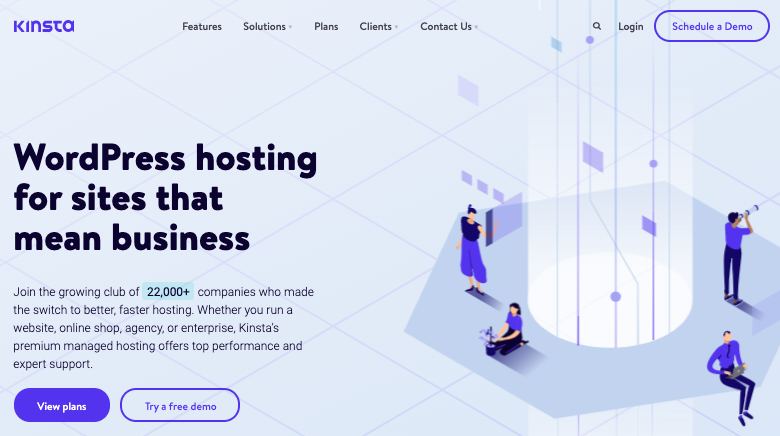 Schedule a demo of MyKinsta and try them yourself!