RocketCDN is one of the worst CDNs.

They use StackPath which has a small network, slow Tbps, and was removed from cdnperf.com. RocketCDN also lacks important features like dynamic caching, Brotli, and HTTP/3. At the end of the day, RocketCDN was designed to be easy. Activate it in 1-click then pay WP Rocket $7.99/mo.

You’re better off using a better CDN like BunnyCDN, QUIC.cloud, or a host with Cloudflare Enterprise (I recommend Rocket.net). All these are faster with more PoPs, image optimization, and QUIC has full page caching (as well as Cloudflare’s APO). No reason to pay for a worse CDN. 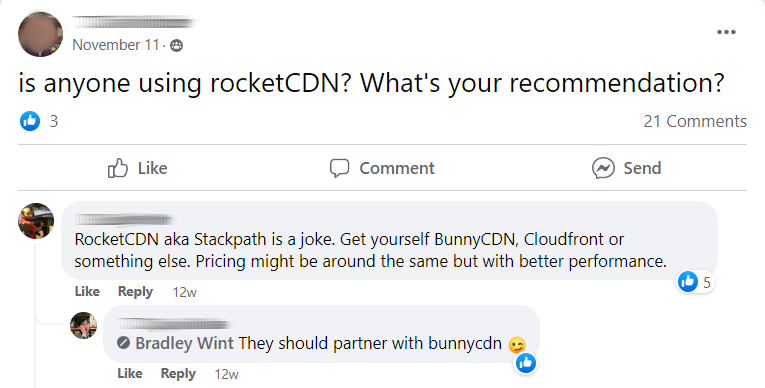 1. RocketCDN vs. Other CDNs

A couple things to note:

Even without Bunny Optimizer’s $9.50/mo image optimization, BunnyCDN alone is still better than RocketCDN. And if you’re open to FlyingPress, FlyingCDN is $.03/GB (cheaper than going directly to BunnyCDN) and it includes Bunny Optimizer with geo-replication. FlyingPress is also better than WP Rocket, so it’s a win-win. Otherwise, I recommend Cloudflare and/or BunnyCDN.

FlyingProxy is another great option which has several Cloudflare Enterprise features and other optimizations, but it’s also $10/mo. The last option (and what I do) would be switching to Rocket.net since their Cloudflare integration is the most robust compared to Cloudways/Kinsta.

It just depends if you’re using LiteSpeed (then use QUIC), Rocket.net or Cloudways (then use Cloudflare Enterprise), or a host that doesn’t have a good CDN (then one of the other options).

StackPath only has 60 edge locations with a Tbps speed of 65+ while other CDNs (like BunnyCDN) have 110+ locations and 80+ Tbps. Which basically means, StackPath is slower.

StackPath was also removed from cdnperf.com, CloudwaysCDN replaced StackPath with Cloudflare Enterprise, and it seems like RocketCDN is one of the only CDNs still using them. 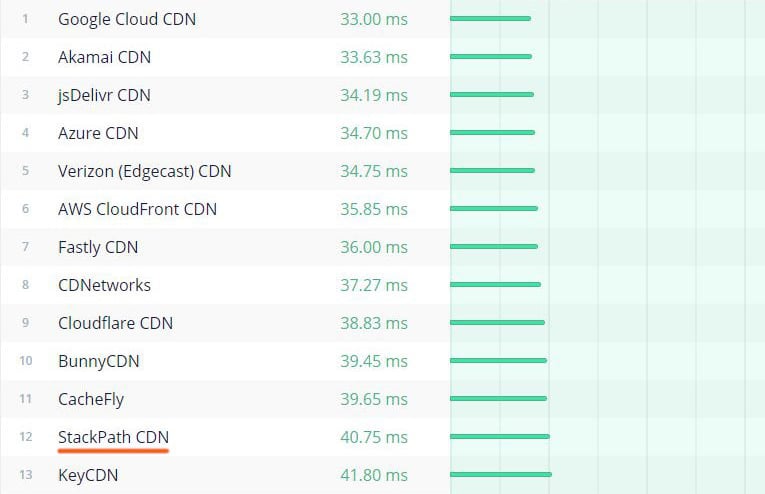 Dynamic caching improves TTFB (usually in multiple global locations) by caching HTML. This can be tested in SpeedVitals or KeyCDN. Cloudflare’s APO, QUIC.cloud, and even SiteGround’s CDN has dynamic caching. Cloudways also said their Cloudflare Enterprise will have this soon.

The way WP Rocket tells you to measure RocketCDN’s performance is misleading because you’re only measuring results from 1 location. The whole point of a CDN is to improve load times/TTFB worldwide. So instead of just using a Waterfall chart, use SpeedVitals + KeyCDN.

Without dynamic caching, global TTFB isn’t improved nearly as much.

RocketCDN uses Gzip and HTTP/2 when other CDNs (like Cloudflare) use Brotli and QUIC’s HTTP/3. Another reason RocketCDN is slower.

5. Lacks Features Outside Of Serving Files From CDN

There are also pretty much 0 settings for RocketCDN inside WP Rocket. When you compare this to Cloudflare/BunnyCDN who have tons of features/settings, it makes RocketCDN very minimal.

While they don’t list any specifications on their website of what “unlimited” actually means, they cut you off at a certain point. So don’t even think about using it for a mid/high traffic site.

7. Meant To Be Easy, Not Performant

This is my biggest gripe about both RocketCDN and WP Rocket.

They sacrifice performance to make things easy. But when you leave it up to third-party companies like WP Rocket to integrate things, you usually end up losing out on features that improve core web vitals. I feel like this is also the case with WP Rocket which (IMO) has made no significant updates for a couple years and fell behind FlyingPress + LiteSpeed Cache.

8. Conclusion: RocketCDN Isn’t Worth The Money

RocketCDN is awful and I didn’t even bother signing up for the affiliate program since telling people to use it would be wrong. Just because it’s sitting in front of you in your cache plugin settings doesn’t mean you should use it. Stick with one of the other (more performant) CDNs.