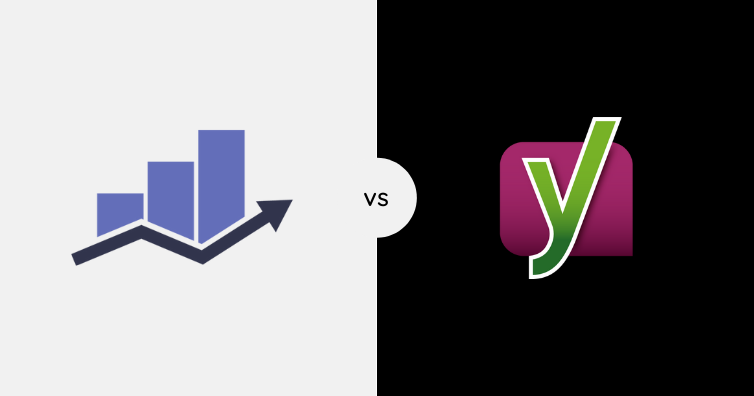 Deciding between Rank Math vs. Yoast?

I switched from Yoast to Rank Math because it has more features with less bloat. Since then, I’ve upgraded to Rank Math Pro which blows Yoast Premium out of the water. The schema alone is worth it (review, FAQ, video, and HowTo schema for the win). But I’ll get into that later. What you need to know is Rank Math free is better than Yoast free, and Rank Math Pro is also better than Yoast Premium. It was rated the #1 WordPress SEO plugin in most Facebook polls.

Rank Math’s setup wizard made it super easy to migrate all Yoast’s SEO data (including redirects) to Rank Math, without having to worry about a drop in rankings. Once complete, I was able to delete multiple plugins since Rank Math includes redirects, image SEO, and schema.

Rank Math doesn’t have an affiliate program at the moment, so there is nothing to gain by saying one is better than the other. But when it comes to Rank Math vs. Yoast, Rank Math is better because it has more features with less bloat. Go here if you’re ready to make the switch.

Rank Math may have compatibility issues with Oxygen Builder, so if you’re using that, I recommend checking out SEOPress.

1. Why I Switched To Rank Math

I switched from Yoast SEO Premium to Rank Math in early 2020 because:

Most key features are highlighted in my Yoast vs. Rank Math comparison, but here’s the full table if you want an in-depth look at how each one’s features stack up. Rank Math has incorporated a few extra features not even included with Yoast SEO Premium like automatic image alt attributes, more advanced schema markup, better analytics, and of course, less bloat. 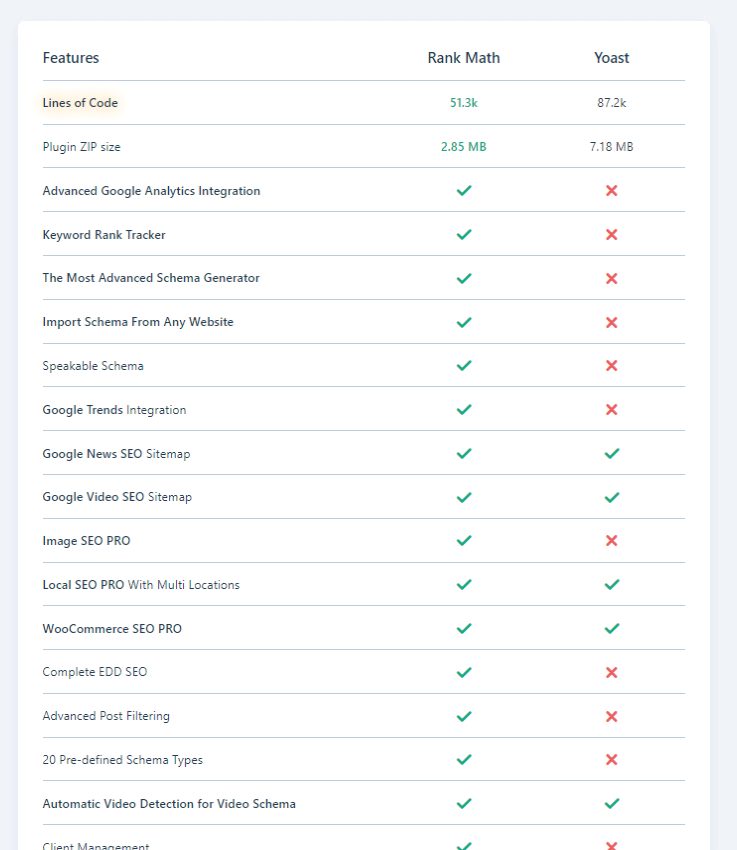 Just like Yoast, Rank Math is module-based where you can enable/disable individual features. 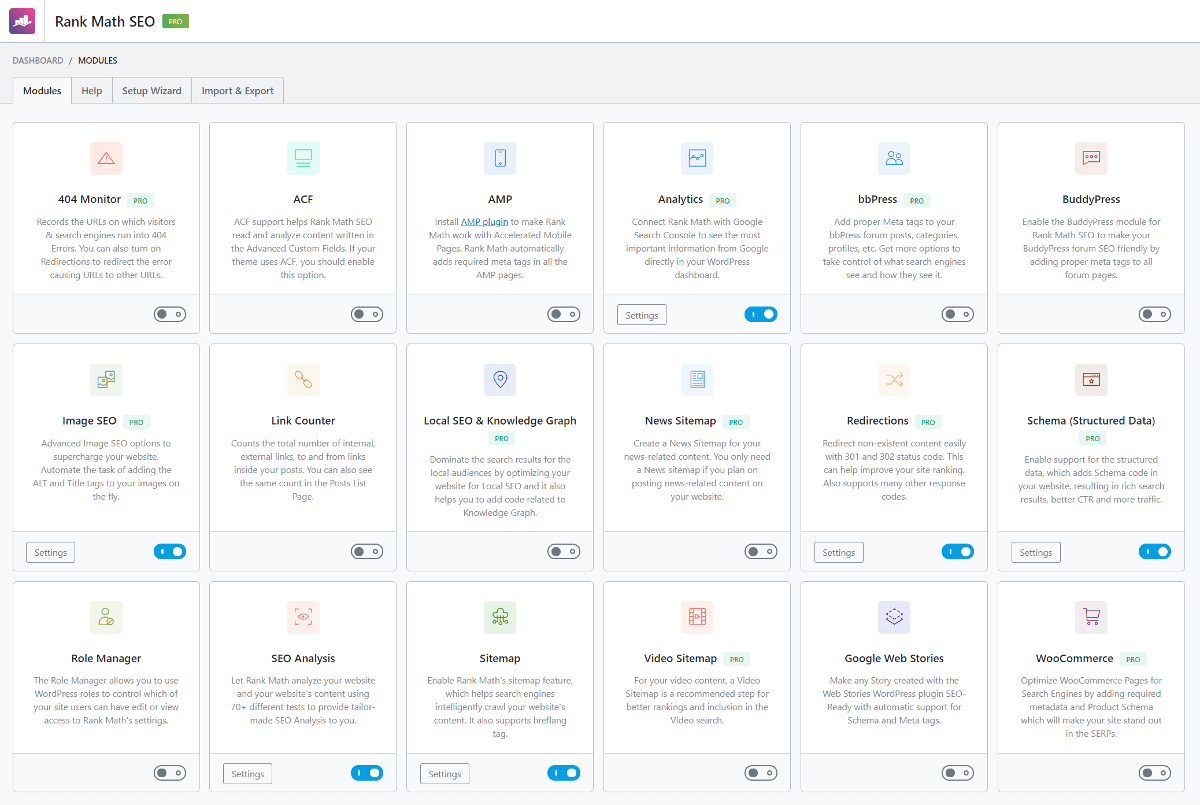 When I ran New Relic and Query Monitor to find slow plugins, Yoast was one of the slowest.

At the time of writing this, Yoast has 87.2k lines of codes while Rank Math has 51.3k, and Rank Math’s plugin zip size is about 3 times smaller. Since I blog about WordPress speed, having lightweight plugins is super important to me and one of the main reasons I decided to switch.

You have to install a separate Hide SEO Bloat plugin to remove Yoast ads which is a little ridiculous. Otherwise, Yoast SEO bombards you with advertisements across the dashboard. 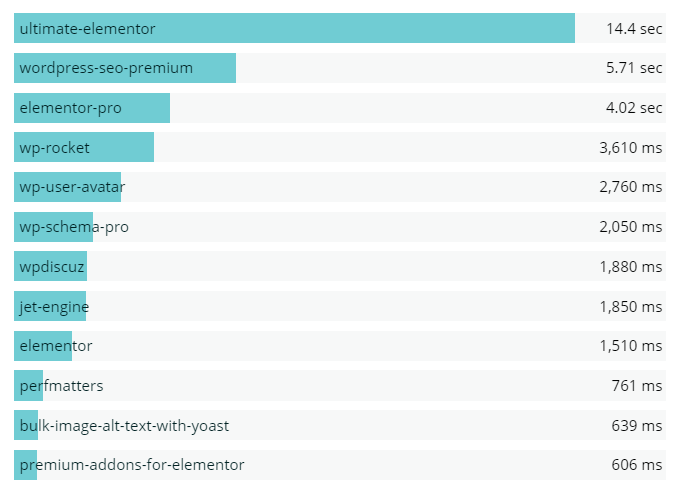 Schema is a big reason to use Rank Math.

They have 18 different schema types including review, FAQ, video, recipe, and course schema. They automatically add schema when you use a video, reducing work when optimizing content.

To add schema using Rank Math, edit a page and scroll down to the Rank Math section. You will see a schema section which includes automatically added schema (e.g. article, video, etc) as well as an option to create your own schema markup. Select your schema data, fill out the required data, and wait for Google to show the schema in search results. No extra schema plugin needed. 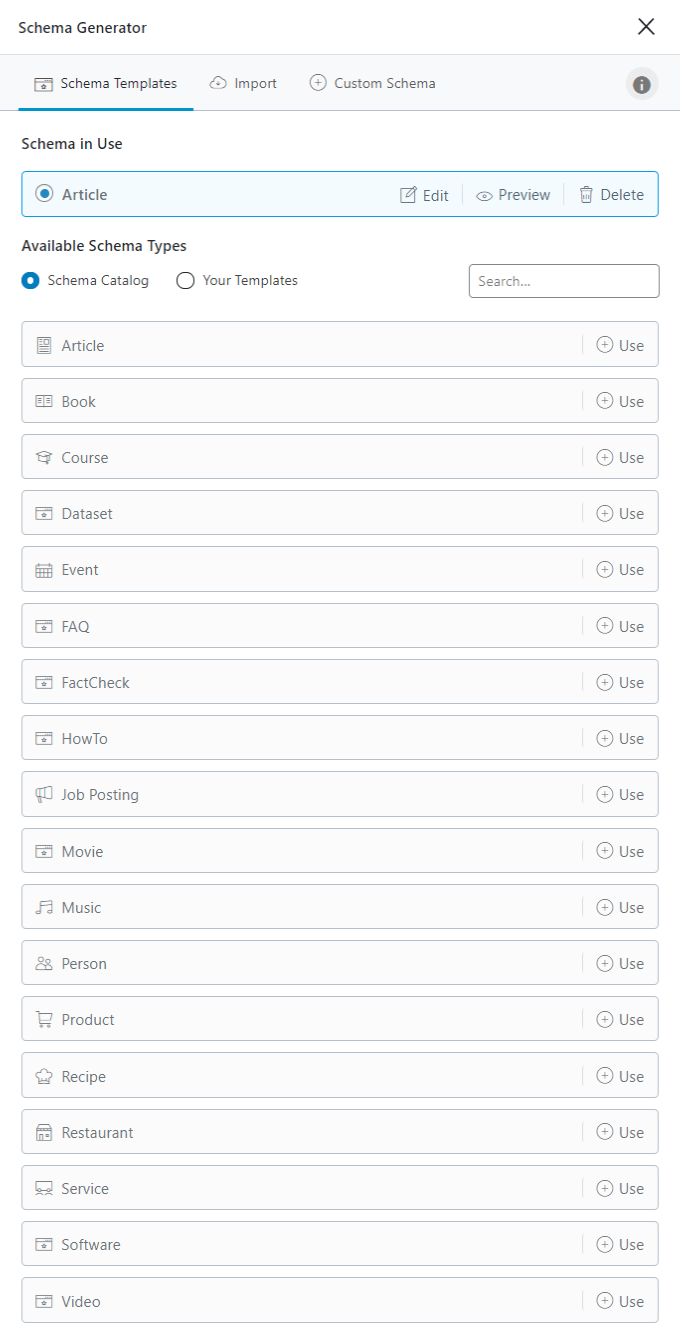 This is a huge time saver because WordPress core stopped adding alt text automatically and you were forced to use a separate image SEO plugin (or add all image alt attributes manually).

With Rank Math, you can use filenames for image alt attributes. So as long as you’re labeling images before uploading them to WordPress, the filename will also be used as the alt attribute.

This means less work adding alt text manually and one less plugin on your site.

These include red and green arrows to show whether a post’s metrics have increased (or decreased) over time. Google Search Console doesn’t come with these nifty arrows, nor does it have a position chart for showing a glimpse of your content’s ranking history. Rank Math makes it very easy to see whether your content has been doing better (or worse) over a period of time.

On the down side, Rank Math’s analytics add more code to your site. 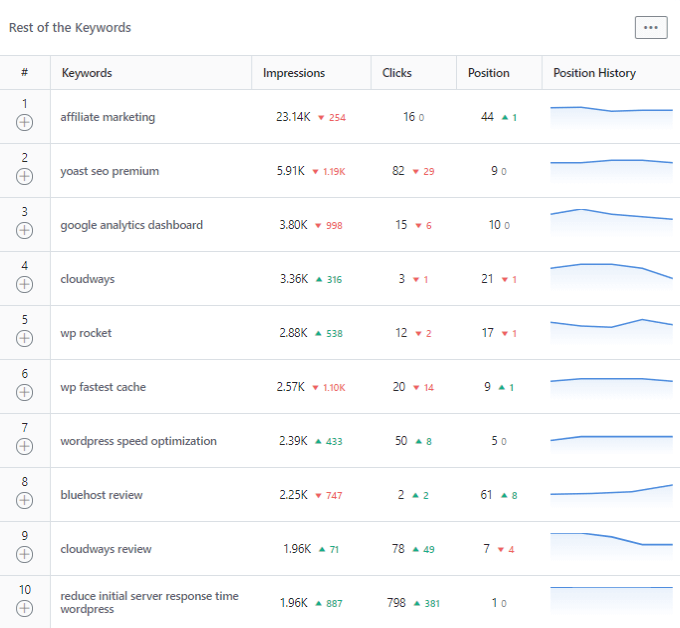 You have to buy Yoast SEO Premium to get a redirect manager, but it’s free with Rank Math.

In fact, when you import Yoast data to Rank Math (when switching plugins), Rank Math gives you the option to import your redirects into their plugin. Again, less plugins on your site. And just like Yoast Premium, Rank Math can automatically create a redirect when you change URLs.

Both Rank Math and Yoast let you optimize content for social media, but many people don’t do this and I want to make sure you do.

In a nutshell, when your content is shared on social media, this makes it so the image formats properly (although you can also customize the title/description for specific social networks). 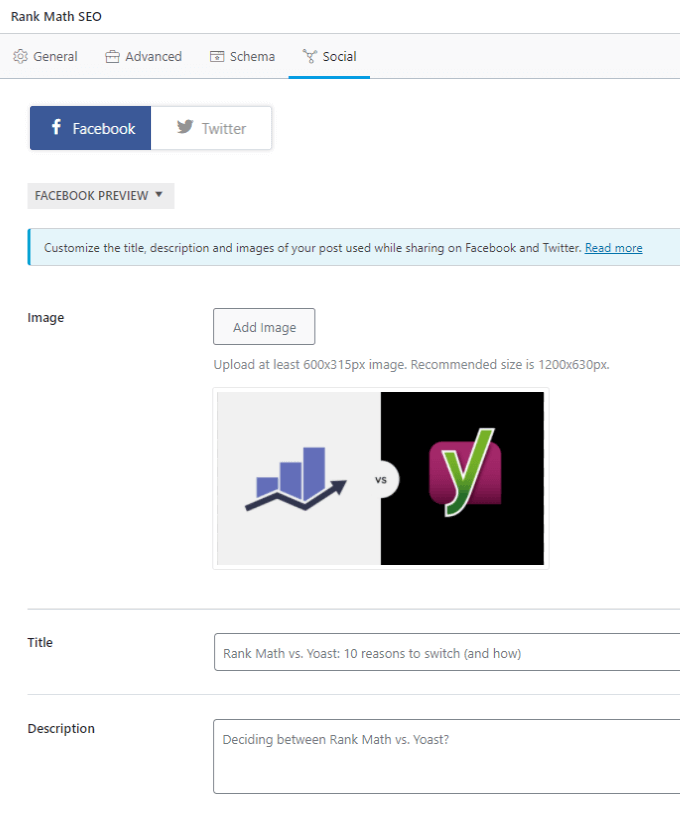 When entering a focus keyword in Rank Math, it gives you keyword suggestions directly from Google Autocomplete.

It’s a small feature, but it saves time from having to do this manually. More importantly, it probably saves noobs from blindly selecting keywords. It also enforces that Google Autocomplete is still one of the best places to find keywords (and is also what I use to this day). 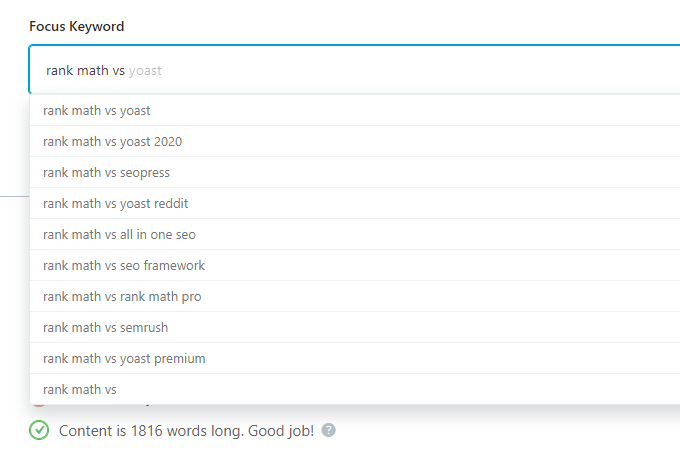 Rank Math and Yoast have a similar content analysis.

I had my designer create a few background colors in CSS and provide me with the HTML I add on every post (which you can find on GitHub). On top of improved user navigation, this lets people link to specific sections in the post which can also help you get jump-to links in Google.

Be careful with table of contents plugins since many don’t let you use named anchors.

But, here’s a big disclaimer: it’s not always good (nor possible) to optimize for multiple keywords. You may find yourself injecting keywords and making content look spammy. Instead, try to sprinkle bits (key, individual words) of each phrase into the most important places in your content. Make sure each keyword is directly relevant (often a synonym) of your main keyword.

This is exactly why I don’t use this feature. Most of my secondary keywords include dates (e.g. Yoast vs. Rank Math 2020) where I simply include the current year in my SEO title + post title. 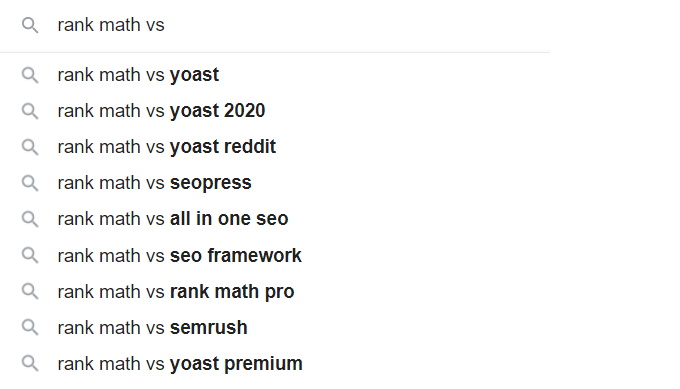 I collected a poll/conversation on Rank Math vs. Yoast and the winner isn’t surprising.

Their community managers are very responsive and you can ask them anything. I would go as far to say that Facebook Group is much more helpful than the support you get with Yoast Premium, which I’ve heard they give you canned answers and refer you to blogs on Yoast’s site.

Rank Math is usually the #1 SEO plugin in Facebook polls (click thumbnails to enlarge). The only exception is SEOPress since Rank Math can have compatibility issues with Oxygen Builder.

Yoast (and Yoast Premium) have too many unnecessary features.

I personally don’t use Yoast or Rank Math’s content analysis.

If you know anything about SEO, you know to include your keyword in SEO title, meta description, URL, post title, and a couple times in the content body. You know to write a catchy SEO title, snippet character limits, and to write in-depth content with nice graphics and videos.

Sometimes, my SEO title doesn’t need a number or power word. Sometimes, my sentences are longer than they should be. It’s OK. Most recommendations have good intentions and can help, but there are many instances where it’s not completely necessary to get all lights 100% green.

15. Switching From Yoast To Rank Math

Just do it, you’ll be happy you did.

I was initially worried about changing SEO plugins since about 90% of my traffic is from Google and I was afraid something would go wrong. But Rank Math’s setup wizard couldn’t have made the process easier and everything went very smoothly. 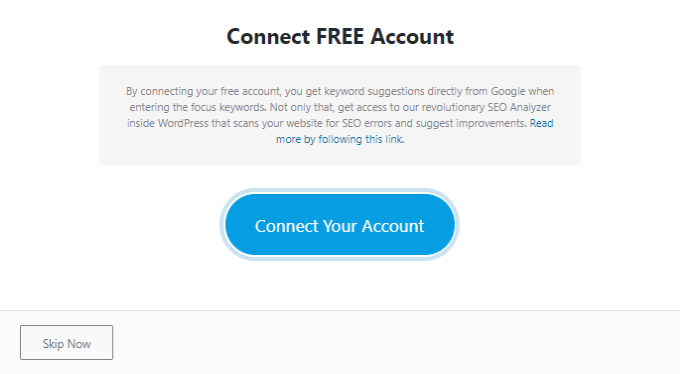 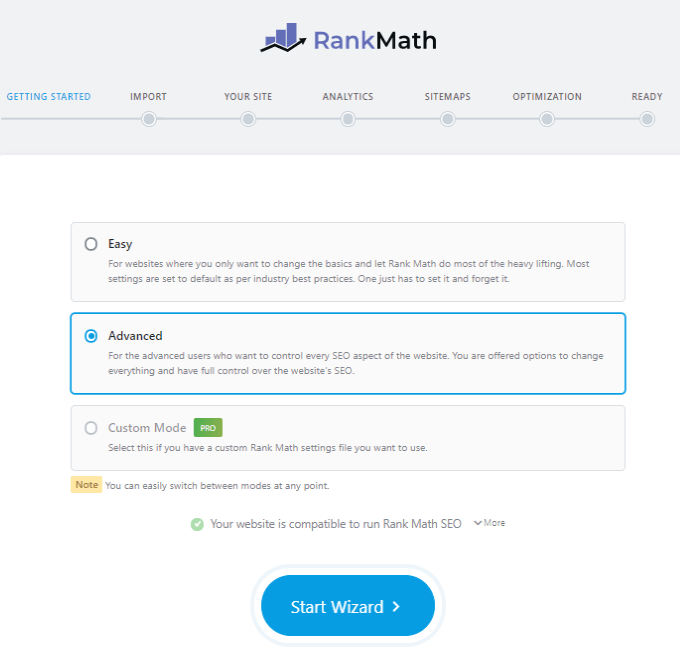 Step 4: Import Data From Yoast (And Redirections If Needed) 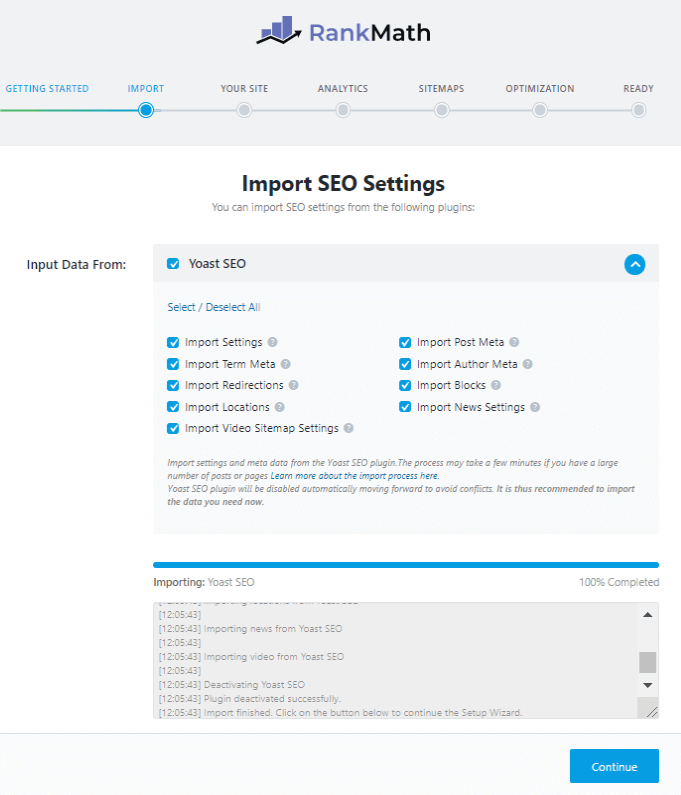 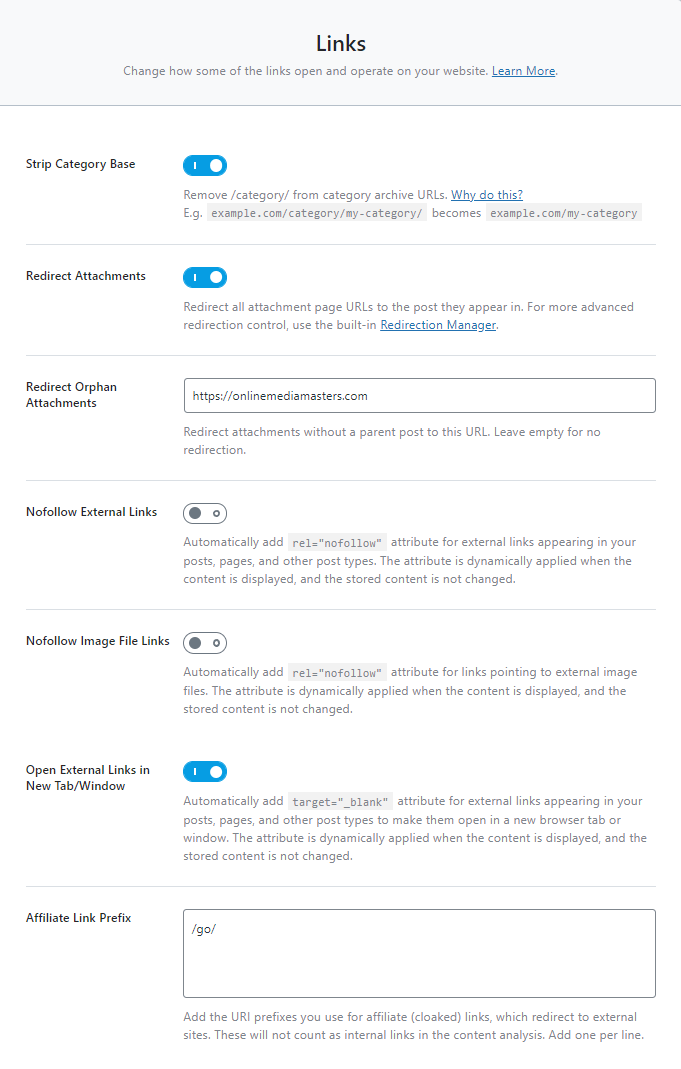 This is the video tutorial I used to import Yoast to Rank Math:

If you still have doubts on whether Rank Math vs. Yoast is better, or you have questions about configuration, leave me a comment and I’ll get back to you as soon as I can. I hope this helped! 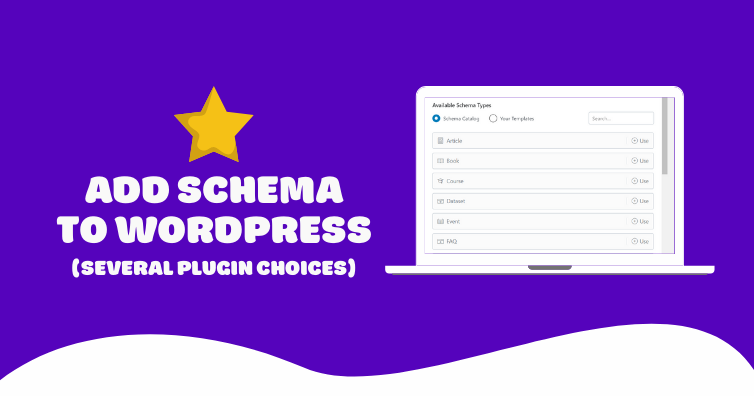 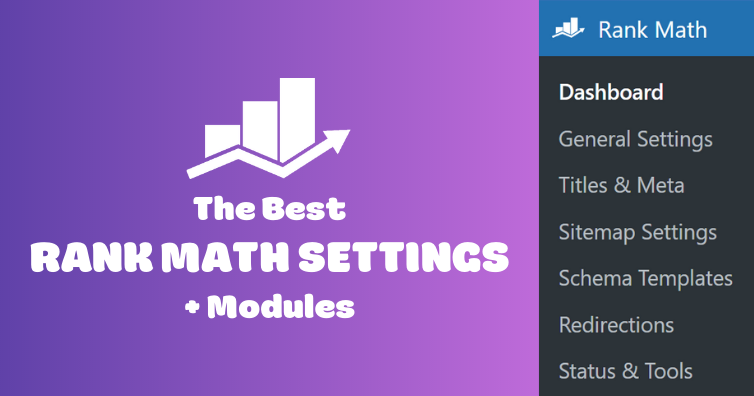 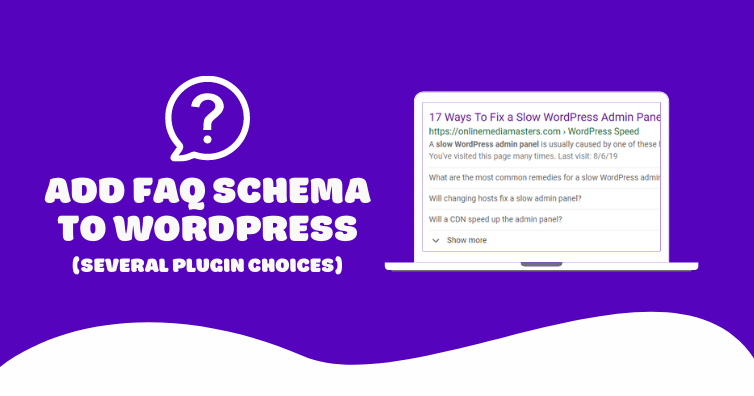 Even though I blog about speed, SEO runs in my blood since that's what made this blog successful. Here's my bio which has 50 random/disturbing things about me with cat/travel pics!